More evidence of the importance and benefits of good assimilable protein to the immune system. 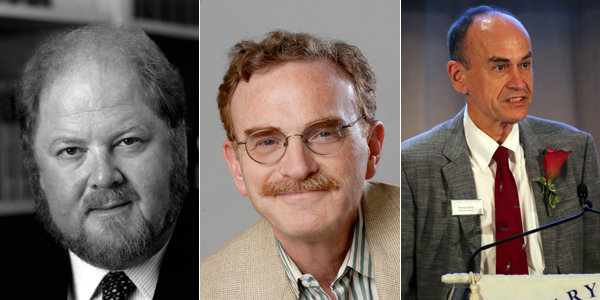 Three Americans won the Nobel Prize in Physiology or Medicine Monday for discovering the machinery that regulates how cells transport major molecules in a cargo system that delivers them to the right place at the right time in cells.

Connect With Us on Social Media

The Karolinska Institute in Stockholmannounced the winners: James E. Rothman of Yale University; Randy W. Schekman of the University of California, Berkeley; and Dr. Thomas C. Südhof of Stanford University.

The molecules are moved around cells in small packages called vesicles, and each scientist discovered different facets that are needed to ensure that the right cargo is shipped to the correct destination at precisely the right time.

Their research solved the mystery of how cells organize their transport system, the Karolinska committee said. Dr. Schekman discovered a set of genes that were required for vesicle traffic. Dr. Rothman unraveled protein machinery that allows vesicles to fuse with their targets to permit transfer of cargo. Dr. Südhof revealed how signals instruct vesicles to release their cargo with precision.

The tiny vesicles, which have a covering known as membranes, shuttle the cargo between different compartments or fuse with the membrane. The transport system activates nerves. It also controls the release of hormones.

Disturbances in this exquisitely precise control system cause serious damage that, in turn, can contribute to conditions like neurological diseases, diabetes and immunological disorders.

Dr. Schekman, 65, who was born in St. Paul, used yeast cells as a model system when he began his research in the 1970s. He found that vesicles piled up in parts of the cell and that the cause was genetic. He went on to identify three classes of genes that control different facets of the cell’s transport system. Dr. Schekman studied at the University of California in Los Angeles and at Stanford University, where he obtained his Ph.D. in 1974.

In 1976, he joined the faculty of the University of California, Berkeley, where he is currently professor in the Department of Molecular and Cell Biology. Dr. Schekman is also an investigator at the Howard Hughes Medical Institute.

Dr. Rothman, 63, who was born in Haverhill, Mass., studied vesicle transport in mammalian cells in the 1980s and 1990s. He discovered that a protein complex allows vesicles to dock and fuse with their target membranes. In the fusion process, proteins on the vesicles and target membranes bind to each other like the two sides of a zipper. The fact that there are many such proteins and that they bind only in specific combinations ensures that cargo is delivered to a precise location.

The same principle operates inside the cell and when a vesicle binds to the cell’s outer membrane to release its contents. Dr. Rothman received a Ph.D. from Harvard Medical School in 1976, was a postdoctoral fellow at Massachusetts Institute of Technology, and moved in 1978 to Stanford University, where he started his research on the vesicles of the cell. Dr. Rothman has also worked at Princeton University, Memorial Sloan-Kettering Cancer Institute and Columbia University.

In 2008, he joined the faculty of Yale University where he is currently professor and chairman in the Department of Cell Biology. Some of the genes Dr. Schekman discovered in yeast coded for proteins correspond to those Dr. Rothman identified in mammals. Collectively, they mapped critical components of the cell´s transport machinery.

Dr. Südhof, 57, who was born in Göttingen, Germany, studied neurotransmission, the process by which nerve cells communicate with other cells in the brain. At the time he set out to explore the field 25 years ago, much of it was virgin scientific territory. Researchers had not identified a single protein in the neurotransmission process.

Dr. Südhof helped transform what had been a rough outline into a number of molecular activities to provide insights into the elaborate mechanisms at the crux of neurological activities, from the simplest to the most sophisticated. He did so by systematically identifying, purifying and analyzing proteins that can rapidly release chemicals that underlie the brain’s activities. The transmission process can take less than a thousandth of a second.

Dr. Südhof studied at the Georg-August-Universität in Göttingen, where he received a medical degree in 1982 and a doctorate in neurochemistry the same year. In 1983, he moved to the University of Texas Southwestern Medical Center in Dallas. Dr. Südhof, who has American citizenship, became an investigator at the Howard Hughes Medical Institute in 1991 and was appointed professor of molecular and cellular physiology at Stanford University in 2008.

All three scientists have won other awards, including the Lasker Prize, for their research.