A decision in an obscure Department of Agriculture committee has drawn a line in the mulch in the debate over organic agriculture. 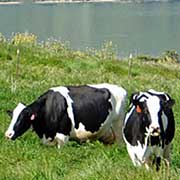 On one side of the divide are those who believe that “organic” means small farms, often run by families. On the other side are those who say the only way to satisfy the nation’s growing hunger for organic fruit, vegetables and dairy products is by applying industrial farming practices to organic production.

This time, the field of battle was milk and the cows that make it. The question: To produce organic milk, must the cows be allowed to graze in pastures much of the year, or can they be confined to large feed lots?

The first round has gone to the grazers. Last week, the National Organic Standards Board recommended to the USDA that organic rules be revised to make it clear that organic milk can come only from cows that graze in pastures during the growing season.

“There are certain dairies where 10 months out of the year the cows are confined and fed out of a trough, and then two months of the year when they’re just about to give birth they’re in the pasture,” says Jim Riddle, who chairs the standards board.

At the core, it’s a question of whether organic is a way of life or a means to an end. In the back-to-the-land movement that began in the 1960s, people who wanted organic food embraced an ethical system. They shopped at tiny cooperative groceries, and if the kale was wilted and the corn wormy, that was OK.

Fast-forward: As baby boomers age and their children start having children, they all want the healthiest food they can get. But they also want to find organic food at their local supermarkets and believe it should be plentiful, available year-round and as pretty as conventionally grown produce.

But “it’s very difficult and expensive for small-scale producers to produce the volume and consistency and have the distribution that large-scale enterprises need,” says Michael Straus, who does marketing for organic products. “These issues are philosophical with massive economic repercussions.”

Clark Driftmier, marketing director for Aurora Organic Dairy of Boulder, Colo., agrees that the real question is the scale of organic-farming operations rather than cows’ access to grass. “The argument is really about scale, but it’s being fought using pasture because it’s generally acknowledged that scale is not a way to kick someone out of organic.”

It was a formal complaint accusing Aurora Organic Dairy of providing its cows insufficient pasture access that helped bring the debate before the livestock committee. The complaint was filed by the Wisconsin-based Cornucopia Institute.

The institute’s Organic Integrity Project “acts as a corporate watchdog assuring that no compromises to the credibility of organic farming methods and the food it produces are made in the pursuit of profit,” its Web site says.

The advisory committee’s decision represents a “gelling of this vision of what organic livestock production should be,” the institute’s Mark Kastel says.

But it won’t “really change the way anyone would operate,” Driftmier maintains.

He calls the complaint against Aurora a smokescreen by “extremist groups” who believe that organic by definition can’t mean big farms.