Neuroplasticity Redefines Our Understanding of the Brain

Neuroplasticity Redefines Our Understanding of the Brain: “

In spite of being the focus of attention for centuries, the human brain continues to be enshrouded in mystery. One major discovery, however, has begun peeling back the veil and allowing scientists to see your brain’s inner workings with new eyes.

Contrary to previously held beliefs, your brain is highly adaptive and seems to operate in a perpetual state of change.

This adaptability, termed neuroplasticity, is explored in the documentary ‘The Brain That Changes Itself,’ featuring psychiatrist and researcher Dr. Norman Doidge,1 author of the book by the same name.

The concept of neuroplasticity was largely developed by neuroscientist Paul Bach-Y-Rita, who was the first to introduce sensory substitution as a tool for treating patients suffering from neurological disorders.2

For four centuries, it was believed your brain worked much like a computer with its functions set as firmly in place as any machine. Today’s neuroscientists are proving your brain is continuously morphing in response to your needs.

The perception that the human brain is hard-wired is not only wrong but ‘spectacularly wrong,’ according to Dr. Doidge.

Your brain’s neurons evolve in response to environmental stimuli, thoughts, emotions, illness, and injury. Ongoing studies reaffirm that when your brain cells become damaged, healthy ones are recruited to take over lost function.

Neuroplasticity explains your brain’s stunning capacity to overcome even the most severe challenges. In fact, this discovery is so profound it may revolutionize our understanding of human nature itself.

Mysteries of the Mind

Your brain contains somewhere in the ballpark of 86 billion neurons. About halfof those neurons are located in your cerebellum, which coordinates muscular activity.

Production of neurons begins in your third week of development at a rate of 250,000 per minute and continues through your early years of life.3

The interaction between all of these neurons — amounting to trillions of connections — is incredibly complex, and there are still more questions than answers. Some of the biggest unsolved mysteries of the mind include:

Emotional experiences may strengthen or preserve memories of things that seem mundane at the time, and help you recall them at a later date.

Sleep loss results in loss of neurons, and proper sleep is important for brain detoxification. Sleep and sleep loss modify the expression of several genes and gene products that may be important for synaptic plasticity and memory, as evidenced by the study of animals in hibernation.

Throw Out Your Concept of ‘Right Brain, Left Brain’

Neuroplasticity is shining new light on the unsolved mysteries discussed above, including learning and memory. Your brain’s capacity to change and adapt begins before birth and continues throughout your lifespan. According to Dr. Doidge:

‘The same plasticity that allows us to change our brains and produce more flexible behaviors is also the source of many of our most rigid ones. All people start out with plastic potential. Some of us, as we grow and develop, enhance that flexibility.

For others, the spontaneity, creativity, and unpredictability of childhood gives way to a routinized existence that repeats the same behavior and turns us into rigid caricatures of ourselves.

Anything that involves unvaried repetition — our careers, cultural activities, skills repeated, and neuroses — can lead to rigidity.’

This understanding about how your brain functions means that we can no longer cleanly separate mental processes by brain region — the ‘reductionist view’ no longer works.

Multiple studies have debunked the popular theory that your ‘right brain’ governs creative activity while deferring logic and analysis to your ‘left brain.’4

Mounting research suggests, instead, that your brain is far more vast and interconnected than such simple delineations would indicate. Multiple areas of your brain work together to perform complex functions, such as creativity.5

Imagination itself can produce brain changes.6 Be careful about what you think, because the mere act of thinking about an action has been shown to produce the same brain changes as actually performing it. 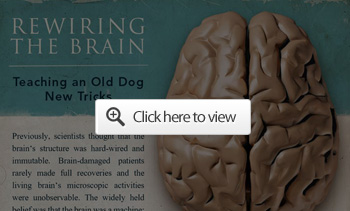 The ability of your brain to adapt to vastly changing circumstances allows for a number of impressive applications and treatments. The following were featured in the documentary:

The Dark Side of Neuroplasticity: Mind Your Moods

As phenomenal as neuroplasticity is, the effects are not always positive — plasticity actually presents a disadvantage in certain situations. Consider what happens in the brain of someone suffering from phantom limb pain. When a limb is amputated, brain neurons become ‘confused’ and must reorganize, which sometimes results in ‘miswiring’ as the brain misinterprets sensory data as it struggles to communicate with the missing limb.

The film features one phantom limb patient for whom facial sensations invaded recently vacated areas of his brain that had been receiving sensations from his amputated hand.

Your brain contains neural ‘maps,’ and your facial map is adjacent to your hand map. This gentleman’s facial map had invaded his hand map — so touching his face generated sensations in his phantom hand. Unfortunately, touch sensations can present as pain. The good news is that the plasticity of the brain allows it to be tricked or manipulated into change. The hand amputee was able to get pain relief with the help of visual illusions that changed how his brain was interpreting sensory signals.

As mentioned earlier, you can deliberately reshape your neural pathways with your thoughts, feelings, and experiences — real or imagined. Neuroplasticity means that your habits can rewire your brain, favorably or unfavorably. For example, a negative outlook on life, depression, anxiety, or chronic pain can actually rewire your neural pathways in a way that makes those conditions more likely to continue.8 If you want to lose it, don’t use it! One excellent tool for reversing unfavorable neural pathways is EFT (Emotional Freedom Technique).

Stanford University Professor Robert Sapolsky has shown that stress is associated with neural degeneration.9 His research shows that long-term stressful life experiences cause elevated cortisol production, which results in the shrinking of your hippocampus. The hippocampus is one of the few regions of your brain capable of producing new neurons (neurogenesis).

Some scientists now believe autism may be a function of abnormal ‘hyperplasticity’ in the brain. With excess connections and hyperactivity, the brain cannot function properly and intrusive thoughts, obsessions, ritualistic, and other abnormal behaviors may result.

Scientists are now harnessing the brain’s plasticity to treat a variety of neurological conditions, including autism. For example, transcranial magnetic stimulation (TMS) is a treatment that involves non-invasively applying magnetic currents to certain brain regions. TMS has been used successfully to alleviate autism symptoms by suppressing excess activity.

Major Discovery — Your Brain and Immune System Are Physically Linked

It’s increasingly clear that your brain, gut, and immune system are intricately connected. Researchers recently discovered a direct link between your brain and immune system via lymphatic vessels that were not previously known to exist. These vessels may play a major role in neurological diseases that have an immune component. It’s not only your immune system that has a direct line to your brain — your gut, which is teeming with microbial life, also communicates with your brain by way of the ‘gut-brain axis.’

In fact, in addition to the brain in your head, embedded in the wall of your gut is your enteric nervous system, which works both independently of and in conjunction with the brain in your head. This communication between your ‘two brains’ runs both ways and is the pathway for how foods affect your mood or why anxiety can make you sick to your stomach, for instance.

The secret to improving your mood and brain health is in your gut, as unhealthy gut flora can impact your mental health, potentially leading to issues such as anxiety, depression, autism, and more. Just as you have neurons in your brain, you also have neurons in your gut — including neurons that produce neurotransmitters like serotonin, which is also found in your brain and is linked to mood. Limiting sugar, eating traditionally fermented foods, and taking a probiotic supplement are some of the best ways to optimize your gut flora, which will in turn optimize your brain and mental health.

Diet and Exercise Are Pillars of Brain Health

Keeping your brain healthy is key to preventing degenerative brain diseases such as Alzheimer’s disease, which currently affects 5.4 million Americans. As Dr. Perlmutter discusses in the video above, the best preventions include a healthy diet and exercise program. In terms of diet, this means replacing carbohydrates with increased quantities of healthy fat and moderate amounts of high-quality protein.

Gluten sensitivity appears to be involved in most chronic diseases, including those affecting the brain, due to the inflammatory effects of gluten on your immune system. Excess dietary sugar (especially fructose) and carbohydrates can have extremely toxic effects on your body, including shrinking your hippocampus (a brain region associated with memory), which is a benchmark for Alzheimer’s disease. Researchers propose that lowering glucose levels, even if they’re within the ‘normal’ range, may benefit cognition in older adults.

Physical exercise is also important for your brain. Those who exercise the most tend to have the least amount of brain shrinkage over time. Not only that, but exercise actually causes your brain to grow in size. In one study, adults aged 60 to 80 who walked for 30 to 45 minutes, three days per week for one year, showed a two percent increase in hippocampus volume.10 Ideally, you’ll want to walk about 7,000 to 10,000 steps a day. A fitness tracker can be a helpful tool to make sure you reach your goal. For more diet and lifestyle strategies to maintain brain function as you age, please refer to my previous article.

Your Brain Needs a Workout, Too

Mental stimulation is also important for keeping your memory razor sharp. Memory decline is NOT a normal part of aging, in spite of what you hear. The process of learning something new, such as learning to play an instrument or a new language for example, is particularly beneficial. Brain-games, puzzle books, card games, and other tools can help keep your mind fit.

Even gardening has been found to have a positive impact on brain health! In 2014, CNN Health listed ‘The 10 Best Apps to Train Your Brain,’11 some of which are aimed at reducing stress and promoting mental health, while others are focused on increasing cognitive function. Their top-10 apps are listed in the table below.