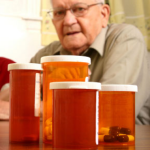 Treatment itself, not treatment error or negligence, according to an analysis of no-fault claims data from New Zealand. For full study see  link at bottom of article.
These findings were published in the October issue of the Annals of Family Medicine.
Katharine Ann Wallis, MBChB, PhD, MBHL, FRNZCGP, from the Department of General Practice and Primary Health Care at the University of Auckland in New Zealand, found that medication injuries were the main source (34%) of all treatment injuries among the elderly, and that within that category, antibiotics were, by far, the biggest culprit.
Of 294 medication injuries recorded in claims between 2005 and 2009 among patients aged 65 years and older, 150 of them (51%) were caused by antibiotics. Next highest among injury sources were nonsteroidal anti-inflammatory drugs (9%) and angiotensin-converting enzyme inhibitors (9%).
Antibiotics also topped the list for causes of serious or sentinel injuries for patients aged 65 years and older. Antibiotics caused 39% of such injuries in that age group, followed by warfarin (14%) and steroids (7%).
The serious/sentinel category was defined as having “the potential to result in” or “has resulted in” “unanticipated death or major permanent loss of function.”
Most medication injuries overall were allergic and idiosyncratic reactions, without a suggestion of error (1295; 91% of medication injuries and 34% of all injuries), according to the study.
Global Implications
The researchers used New Zealand’s data because its accident insurance model provides coverage for treatment and rehabilitation costs for all personal injuries, including those caused by treatment, regardless of severity or fault. It is a view unavailable to researchers in tort-based jurisdictions.
However, Wanda Filer, MD, president-elect of the American Academy of Family Physicians, told Medscape Medical News the picture the author paints is “probably quite accurate here.”
The elderly are particularly susceptible to antibiotic injury, she noted, because they often are taking multiple medications, leaving them vulnerable to drug–drug interactions. Also, health systems are just starting to get a picture of all the medications patients are taking.
“Only recently have our electronic records been able to get the information about what patients are being prescribed in different sites. I’m hoping that that will begin to help us improve things,” she said. She added that EHR alerts can be helpful for notice of multiple medications, but fine-tuning is needed to prevent alert fatigue.

She noted that even when medications can be reconciled, that does not take into account everything a patient is taking over the counter.
Dr Filer said she was most surprised by the clear prevalence of antibiotics in causes of injury.
“I would have anticipated the [nonsteroidal anti-inflammatory drugs,] and even the warfarin and the opiates,” she said.

She called the findings “eye-opening” and said the study emphasized that although we hear much about antibiotics’ role in being unnecessary and contributing to global resistance, they also have the potential to do substantial harm.
Dr Wallis concludes: “To improve patients’ safety, in addition to reducing error, clinicians need to reduce patients’ exposure to treatment risk, where appropriate.”
For this study, primary care included general practice/family medicine clinics; physiotherapy, chiropractic, and osteopathy rooms; dental clinics; community pharmacies, laboratories, and radiology rooms; and nursing homes. The researchers excluded claims arising from treatment in hospitals, private specialist clinics, and by maternity clinicians.

Dr Wallis reports some limitations of the data and writes there may be underreporting or selective reporting of injuries.
“For example, there are comparatively few claims for falls, delay or failure to diagnose or treat, and drugs well-known to cause harm, such as hypnotic, diuretic, hypoglycemic, and oral antiplatelet drugs,” she writes.
Dr Wallis and Dr Filer have disclosed no relevant financial relationships.
Ann Fam Med. 2015;13:472-474. Full text