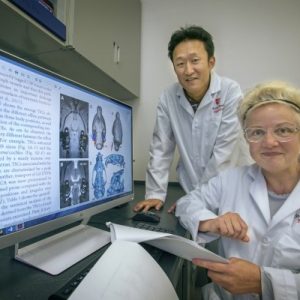 Helene Benveniste, MD, PhD, and Hedok Lee, PhD, analyzed the glymphatic pathways of rodent models to assess how body posture affects the clearance of brain waste. (Image: Stony Brook University)
How you sleep – on your side, on your back, or face down – is usually thought of as a personal preference, but body position might actually affect how efficiently the brain clears waste, according to new research out of Stony Brook University. The findings could have implications for the prevention of neurodegenerative diseases that are characterized by plaque buildup.
Helene Benveniste, M.D., Ph.D., lead investigator and professor in the department of Anesthesiology and Radiology at Stony Brook University School of Medicine in New York told Bioscience Technology that it is too early to comment on humans, but “in animals it is clear that the lateral position increases waste removal compared to other body positions.”
The research was published Tuesday in the Journal of Neuroscience.
Similar to the way the lymphatic system clears waste from organs, the glymphatic pathway is where cerebrospinal fluid (CSF) filters through the brain and exchanges with interstitial fluid (ISF) to clear waste chemicals, such as amyloid B and tau proteins, from the brain. The buildup of these proteins and other waste chemicals is suspected in the development of neurological diseases including Alzheimer’s.
The system, which is a brain-wide pathway that runs along (i.e. on the outside) of all vessels in the brain and connects to the space surrounding brain cells (referred to as the ISF space), has been studied in detail in animal models. The outer part of the network ‘tube’ is bordered by a certain type of brain cells, known as ‘astroglial’ cells, Benveniste explained. The astoglial cells endfeet cover >97 percent of the surface of all brain vessels. “One can think of this as if the astroglial cell’s ‘endfeet’ are arranged as a donut shaped around all the vessels,” Benveniste told Bioscience Technology.

She explained how the system ‘flushes’ out waste: “On the astroglial endfeet there are special water channels (aquaporin-4 water channels) which are critical for how efficiently the glymphatic system can get rid of waste because it allows water to move fast through the brain tissue so as to ‘flush’ waste products out efficiently. The small gap between the astroglial endfeet also act like a ‘sieve’ so that only waste products of a certain size can access the entire pathway. Cerebrospinal fluid (CSF) circulates into the glymphatic pathway from the surface of the brain along the arteries which dives directly from the surface into the deeper part of the brain; and ultimately enters the space around the brain cells; and sweeps through it and thereby mixes with the interstitial fluid of the brain which contains waste products. The CSF-ISF mix with the waste products is then flushed out on the other ‘side’ along the veins and ultimately ends up in lymph vessels in the body and then in the blood.”
She noted that there are other factors which can speed up or slow down the transport through the system.
Maiken Nedergaard, Ph.D., at the University of Rochester, a co-author on the study, previously demonstrated that the glymphatic pathway works better during sleep or when one is under general anesthesia, compared to wakefulness. Since people change body positions during sleep, “it was a clear next question to ask in regards to the glymphatic pathway and waste clearance,” Benveniste told Bioscience Technology.

The brain’s glymphatic pathway clears harmful wastes, especially during sleep. This lateral position could prove to be the best position for the brain-waste clearance process. (Image: Stony Brook University)
Benveniste and colleagues used dynamic contrast magnetic resonance imaging (MRI) to image the glymphatic pathway at work in rodents’ brains. Three positions — lateral (side), prone (down), and supine (up) — were imaged using the method, along with kinetic modeling to quantify the CSF-ISF exchange rates in the rodents.
“The analysis showed us consistently that glymphatic transport was most efficient in the lateral position when compared to the supine or prone positions,” said Benveniste. “Because of this finding, we propose that the body posture and sleep quality should be considered when standardizing future diagnostic imaging procedures to assess CSF-ISF transport in humans and therefor the assessment of the clearance of damaging brain proteins that may contribute to or cause brain diseases.”
So why is the glymphatic system more effective when sleeping in the lateral position?
“When the body trunk and head is in the prone (more upright) position, more of the cerebrospinal fluid (CSF) moves in other directions,” Benveniste explained. “For example, more CSF flows towards the spine and out along the large vessels on the neck. In other words it appears that ‘less CSF in this position actually enters the brain glymphatic pathway and therefore overall waste clearance is diminished.”
This could have implications for prevention of certain neurodegenerative diseases. “We speculate that if the glymphatic pathway (as well as other systems designed to get rid of these waste substances) continuously move amyloid beta and tau when it starts to build up it would in principle ensure (if it worked efficiently) that these products are not allowed to accumulate excessively in the brain.”
Once these proteins build up they can form aggregated plaques, which can be very difficult for the brain to get rid of. “Thus, any life-long habits that can promote optimal waste removal via the glymphatic pathway might help prevent or postpone onset of neurodegenerative diseases such as Alzheimer’s,” Benveniste told Bioscience Technology.
Imaging testing in humans is still needed.
Up next Benveniste and colleagues are working to study how the glymphatic system can be controlled and maintained over a lifetime in order to maximize waste clearance and to prevent neurodegenerative diseases.