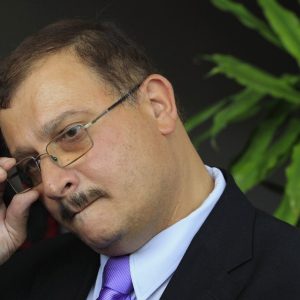 Professor Gilles-Eric Séralini has been honoured with the 2015 Whistleblower Award by the Federation of German Scientists (VDW) and the German Section of the International Association of Lawyers Against Nuclear Arms (“IALANA”).

Prof Séralini received the award in recognition of his research demonstrating the toxic effects of Roundup herbicide on rats when administered at a low environmentally relevant dose over a long-term period. After the research was published, Prof Séralini was attacked in what the VDW and IALANA call “a vehement campaign by ‘interested circles’ from the chemical industry” as well as from the UK Science Media Centre. This smear campaign led to the retraction of his team’s paper by the first journal that published it. But Prof Séralini and his team fought back, countering the scientific arguments raised against their research and republishing their paper in another journal.

While Prof Séralini’s study was not a carcinogenicity study but a long-term toxicity study, the carcinogenic potential of Roundup was confirmed this year when the World Health Organisation’s cancer agency IARC published its verdict that glyphosate herbicides are “probable” human carcinogens.

VDW and IALANA said that Prof Séralini’s unwavering refusal to abandon his professional ethics since the publication of his paper “gained him the worldwide support of many scientists who defended the methods he chose and deemed his research results to represent genuine scientific progress”. They added, “He greatly furthered the scientific debate on the health risks of the glyphosate-based herbicide Roundup. He revealed systemic weaknesses in the accreditation process for herbicides in particular and pesticides in general. So once again it can clearly be seen that the preservation of our health depends on whistleblowers.”

Prof Séralini shared the Whistleblower Award jointly with the former US drone pilot Brandon Bryant. Bryant quit active service with the US armed forces in 2011 due to his rejection of the secret worldwide drone war carried out by the US. He particularly objected to the innumerable civilian victims and the severe psychological consequences for the drone pilots involved in the killings.

The awards were presented on Friday, 16 October 2015, at 7.30pm, in the Bürgersaal of Karlsruhe City Hall in the presence of the Mayor, Dr Frank Mentrup.

Pulling Back the Curtain on Tamiflu →
← Allergic to Wheat? Is it the Gluten or Something Else?