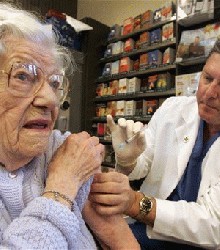 A new study based on more than three decades of U.S. data suggests that giving flu shots to the elderly has not saved any lives.

“There is a sense that we’re all going to die if we don’t get the flu shot,” said the study’s lead author, Lone Simonsen, a senior epidemiologist at the National Institute of Allergy and Infectious Diseases in Bethesda, Md. “Maybe that’s a little much.”

The study should influence the nation’s flu prevention strategy, Simonsen said, perhaps by expanding vaccination to schoolchildren, the biggest spreaders of the virus.

However, the U.S. Centers for Disease Control and Prevention in Atlanta plans no change in its advice on who should get flu shots, saying the NIH research isn’t enough to shift gears.

“We think the best way to help the elderly is to vaccinate them,” said CDC epidemiologist William Thompson. “These results don’t contribute to changing vaccine policy.”

The CDC currently recommends flu shots for people age 50 and over, nursing home residents, children 6-23 months, pregnant women, people with chronic health problems and certain health care and day care workers. When vaccine was scarce a few months ago, healthy adults under 65 were urged to forgo the shot.

Although the study, published Monday in the Archives of Internal Medicine, looks at data from the whole U.S. elderly population over time, it doesn’t directly compare vaccinated vs. unvaccinated elderly, Thompson said. Previous studies that made that comparison found the vaccine decreased the rate of all winter deaths.

But the former head of the nation’s vaccine strategy, Dr. Walter Orenstein, said Simonsen’s work “should make us think twice about our current strategy and (about) potentially enhancing it.” Orenstein is former director of the CDC’s National Immunization Program and now leads a program for vaccine policy development at Emory University.

A shift to vaccinating schoolchildren, the age group most likely to spread the flu virus, is advocated by colleagues of Orenstein’s at Emory in a separate report to be published Tuesday in the American Journal of Epidemiology.

The NIH and Emory papers, one a highly technical statistical analysis of death data and the other a commentary based on field studies and mathematical modeling, come during a season that focused the nation’s attention on vaccine supplies.

As a vaccine shortage loomed last fall, the CDC urged shots only for the highest-risk groups. Most of the 36,000 people who die each year of flu-related causes are elderly and the nation’s strategy has focused on getting shots to them, as well as other high-risk groups.

Last week the CDC reported that about 59 percent of older Americans got shots in 2004, down from 65 percent in 2003. Based on her research, Simonsen doesn’t expect to see a corresponding increase in flu-related deaths this year, something that “can be seen as good news.”

The flu vaccine is less effective in the elderly than in younger people. It works, but not very well, said Ira Longini, a biostatistics professor at Emory University’s Rollins School of Public Health and a proponent of vaccinating schoolchildren.

While it’s smart for senior citizens to get their yearly flu shots because it can decrease their risk of getting sick, he said, a smarter government strategy would emphasize shots for children, ages 5 to 18. His statistical models show that strategy could save more elderly Americans from hospital visits and death.

“If we really want to make a difference and control influenza, we simply have to change the policy. We have to vaccinate large numbers of children,” Longini said.

He and his colleague Dr. Elizabeth Halloran write that if 70 percent of schoolchildren were vaccinated, the elderly would be protected without flu shots. The strategy would require 42 million doses of flu vaccine. Even during this season’s shortage, there were 57 million doses available, their report says.

Yearly flu shots have been recommended for people 65 and older since the 1960s and for those 50 and older since 2000. Vaccination rates have risen among seniors from 20 percent before 1980 to 65 percent in 2001, according to the NIH study.

Simonsen and her team of researchers could find no corresponding decrease in death rates. Their analysis took into account the fact that people are living longer and that more virulent strains of flu dominated the 1990s.

The CDC’s Thompson said Simonsen didn’t take into account the effect of a gradual lengthening of the average flu season over the decades. But Simonsen said that no matter what model she used to define a flu season, she came to the same result.

For the average senior citizen, the annual risk of dying from the flu is low: about 1 in 1,000. They said senior citizens still should try to get flu shots, but shouldn’t panic if vaccine isn’t available.