(Global Warming Alert?) Seas are Rising Way Faster Than Any Time in Past 2,800 Years 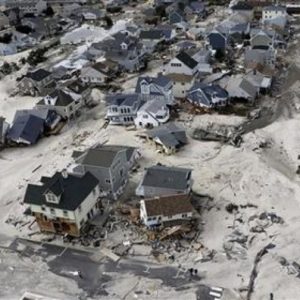 In this Oct. 31, 2012 file photo, a view from the air shows the destroyed homes left in the wake of Superstorm Sandy in Ortley Beach, N.J. Sea levels on Earth are rising several times faster than they have in the past 2,800 years and are accelerating because of man-made global warming, according to new studies. An international team of scientists dug into two dozen locations across the globe to see what the sea level was for the past 2,800 years. They charted gently rising and falling seas over centuries and millennia. Until the 1880s and industrialization of society, on average the fastest seas rose was about 1 to 1.5 inches a century, plus or minus a bit. During that time global sea level really didn’t get much higher or lower than three inches above or below the 2,000-year average. (AP Photo/Mike Groll)

Sea levels on Earth are rising several times faster than they have in the past 2,800 years and are accelerating because of man-made global warming, according to new studies.

An international team of scientists dug into two dozen locations across the globe to chart gently rising and falling seas over centuries and millennia. Until the 1880s and the world’s industrialization, the fastest seas rose was about 1 to 1.5 inches (3 to 4 centimeters) a century, plus or minus a bit. During that time global sea level really didn’t get much higher or lower than 3 inches above or below the 2,000-year average.

But in the 20th century the world’s seas rose 5.5 inches (14 centimeters). Since 1993 the rate has soared to a foot per century (30 centimeters). And two different studies published Monday in the journal Proceedings of the National Academy of Sciences, said by 2100 that the world’s oceans will rise between 11 to 52 inches (28 to 131 centimeters), depending on how much heat-trapping gas Earth’s industries and vehicles expel.

“There’s no question that the 20th century is the fastest,” said Rutgers earth and planetary sciences professor Bob Kopp, lead author of the study that looked back at sea levels over the past three millennia. “It’s because of the temperature increase in the 20th century which has been driven by fossil fuel use.”

To figure out past sea levels and rates of rise and fall, scientists engaged in a “geological detective story,” said study co-author Ben Horton, a Rutgers marine scientist. They went around the world looking at salt marshes and other coastal locations and used different clues to figure out what the sea level was at different times. They used single cell organisms that are sensitive to salinity, mangroves, coral, sediments and other clues in cores, Horton said. On top of that they checked their figures by easy markers such as the rise of lead with the start of the industrial age and isotopes only seen in the atomic age.

When Kopp and colleagues charted the sea level rise over the centuries – they went back 3,000 years, but aren’t confident in the most distant 200 years – they saw Earth’s sea level was on a downward trend until the industrial age.

Sea level rise in the 20th century is mostly man-made, the study authors said. A separate, not-yet-published study by Kopp and others found since 1950, about two-thirds of the U.S. nuisance coastal floods in 27 locales have the fingerprints of man-made warming.

And if seas continue to rise, as projected, another 18 inches of sea level rise is going to cause lots of problems and expense, especially with surge during storms, said study co-author Stefan Rahmstorf of the Potsdam Institute for Climate Impact Research in Germany.

“There is such a tight relationship between sea level and temperature,” Horton said. “I wish there wasn’t, then we wouldn’t be as worried.”

The link to temperature is basic science, the study’s authors said. Warm water expands. Cold water contracts. The scientists pointed to specific past eras when temperatures and sea rose and fell together.

The Kopp study and a separate one published by another team projected future sea level rise based on various techniques. They came to the same general estimates, despite using different methods, said Anders Levermann, a co-author of the second paper and a researcher at the Potsdam Institute.

If greenhouse gas pollution continues at the current pace, both studies project increases of about 22 to 52 inches (57 to 131 centimeters). If countries fulfill the treaty agreed upon last year in Paris and limit further warming to another 2 degrees Fahrenheit, sea level rise would be in the 11 to 22 inch range (28 to 56 centimeters).

Jonathan Overpeck at the University of Arizona, who wasn’t part of the studies, praised them, saying they show a clear cause and effect between warming and sea level rise.

Why Are So Many People Choosing Not to Vaccinate? →
← Some Experts Contend Brazil is Exaggerating Zika Crisis