By ROBERT D. McFADDEN
Published: April 4, 2006
Thunderstorms that generated tornadoes up to a half-mile wide and hailstones the size of softballs roared across eight states in the Midwest and South on Sunday night, killing at least 27 people, injuring hundreds, destroying thousands of homes and businesses and knocking out power to tens of thousands. 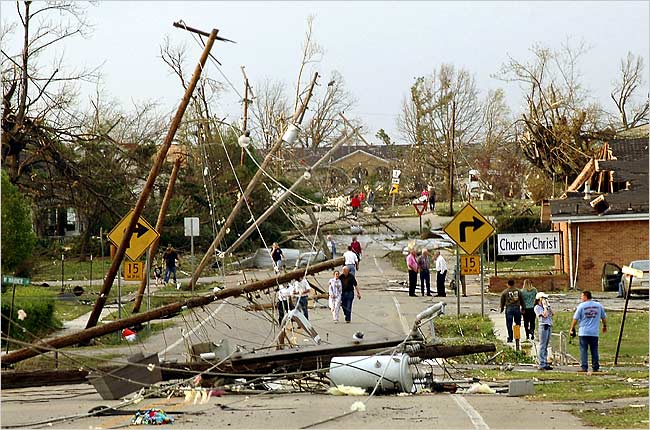 The New York Times
Tennessee was badly hit. Tornadoes killed 23 people in the northwest part of the state.
Aerial and ground surveillance yesterday showed that northwest Tennessee was the hardest hit. Tornadoes that slashed through five counties there killed 23 people, including an 11-month-old boy, his grandparents and a family of four, officials said. Three deaths were reported in neighboring Missouri, and one person died in Illinois when high winds brought down the roof of a clothing store.

There was no immediate estimate of the losses, but the scale of the damage Ã¢â‚¬â€ spread over parts of Iowa, Kentucky, Ohio, Arkansas and Indiana, as well as Tennessee, Missouri and Illinois Ã¢â‚¬â€ suggested tens if not hundreds of millions of dollars. Churches, firehouses, police stations and schools, as well as homes and businesses, were shattered, and, as in Hurricane Katrina, many families lost everything.

As rescue teams with dogs sought survivors in the rubble of many communities yesterday, state and local officials surveyed wreckage, utility crews struggled in a wilderness of downed trees and power lines and witnesses told of howling twisters that crushed people in their homes and wiped out whole sections of several small towns.

“It just came up all of a sudden,” Betty Sisk said of the tornado that scythed through Newbern, Tenn., population 2,500. “I was at the front door and had the kids in the closet, and I ran to the closet and shut the door and put covers over us. We locked arms.” She said the house suddenly disintegrated around them, and she, her son and daughter were hurled apart.

“It picked us up and tore the house apart,” Mrs. Sisk told The Associated Press. “Debris was going here and there. It jerked my daughter away from me and threw her one way and took my son and I a couple of feet away. She crawled to us after we started hollering at each other. Then we laid there on the ground. I told them to be real still.”

Most of the deaths occurred in Tennessee’s Dyer and Gibson Counties along a 25-mile swath from Newbern to Bradford, 80 miles northeast of Memphis. Gov. Phil Bredesen of Tennessee said he would visit the two sparsely populated counties today and asked President Bush to declare them federal disaster areas.

In Dyer County, 15 people were killed, most of them in the collapse of homes. In Dyersburg, the county seat, refugees took shelter and were fed at a school. Outside, the path of a tornado a half-mile wide was apparent in the moonscape of shattered homes and bare foundations, splintered and uprooted trees, piles of clothing, furniture and rubble. Sheriff Jeff Holt said 100 homes had been hit.

In Gibson County, officials said eight people were killed, including a young couple and their two sons, ages 5 and 3, and an infant and the grandparents who were baby-sitting for him in Bradford. Dozens of people were injured, many with broken bones and puncture wounds from flying debris, while 17 were hospitalized in critical condition. Officials said more than 1,200 buildings were damaged.

Donnie Smith, a spokesman for the Tennessee Emergency Management Agency, said, “For that little stretch of destruction that ran through those counties, that’s about as bad as it can be.”

In southeastern Missouri, a tornado caused wide damage but no deaths in Caruthersville, a city of 6,700, said Mayor Diane Sayre. Susie Stonner, a spokeswoman for the Missouri Emergency Management Agency, said 60 percent of the town was damaged.

Elsewhere in Missouri, three people died of storm-related injuries, including a 42-year-old man in Stoddard County whose trailer was flipped and hurled into a tree by winds that gusted from 60 to 80 miles an hour. In the St. Louis suburb of Fairview Heights, Ill., a 54-year-old man was killed when the roof of a clothing store collapsed on him, the police said.

In Arkansas, hailstones four inches in diameter slammed through roofs, and a dozen tornadoes struck various parts of the state. One destroyed nearly half the town of Marmaduke. Brick shells and wooden splinters were all that remained of some homes, and railroad cars toppled from tracks attested to the power of a twister.

The National Weather Service said the wild storms developed on Sunday as a cold front from the west slammed into a mass of warm, humid air standing over the Midwest. The service’s Storm Prediction Center in Norman, Okla., said it had reports of 63 tornadoes in the eight-state region.

In Dyersburg, Charlotte Sweat, 49, picked over the ruins of her home, which had been pushed off its foundation into a ravine. “We’re just lucky to be alive,” Ms. Sweat said, recalling her family’s desperate race in two cars to escape the twister. “There are a lot of people that didn’t make it, and we did.”

She continued, “We don’t have anything but the clothes we’re wearing, but we have our lives.”

Gretchen Reuthling contributed reporting from Chicago for this article, and Theo Emery from Dyersburg, Tenn.