Health-conscious consumers have always known that spinach is a good source of many important nutrients, including iron and folate.

But with last month’s E. coli outbreak, even though bags of spinach are returning to store shelves, some cautious consumers may want to find alternatives to this muscular vegetable. 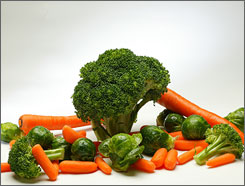 ‘Try and find other things that will be similar Ã¢â‚¬â€ like romaine or kale,’ suggests Dawn Blatner, a registered dietitian at Northwestern Memorial Wellness Institute in Chicago and spokeswoman for the American Dietetic Association.

Blatner says it is relatively easy to find substitutes for spinach in other leafy green vegetables. This could be an opportunity for people to try healthful foods they hadn’t eaten before, she says. ‘You sautÃƒÂ© kale just like you sautÃƒÂ© spinach.’

Cynthia Sass, a registered dietitian in Tampa, says it is important for people to eat a variety of foods. ‘Taking one food out like this really should not affect people’s diet,’ she says. ‘You don’t want to rely on one food for all of your nutrients.’

Sass also says many of the nutrients found in spinach can be found in entirely different foods, such as iron from black beans, beta-carotene from broccoli and folate from orange juice. In general, she advises eating fruits and vegetables of every color of the rainbow.

As for spinach’s fate, Blatner believes the nutrient-rich vegetable will make a comeback once the current crisis has settled down. ‘Take the situation seriously, but there’s not so much cause for alarm.’

On Friday, the Food and Drug Administration lifted its warning on spinach except for specific brands packaged on certain dates. Consumers should continue to avoid spinach recalled by Natural Selection Foods LLC of San Juan Bautista and four companies that it supplied.

The spinach scare aside, parents have always had trouble trying to incorporate dark greens into children’s diets. Fussy children are not known for eating their vegetables.

Elizabeth Ward, author of the Complete Idiot’s Guide to Feeding Your Baby and Toddler, urges parents not to give up trying to give their children dark greens. She recommends buying frozen or chopped kale and putting it into soups, stews and pasta dishes. ‘Sometimes they can’t even tell they’re there,’ she says.

Other ways to incorporate green vegetables: Put cheese sauce on them or cook them in butter or olive oil, Ward says. If all else fails, parents can try putting them next to something the child likes and is familiar with, such as mashed potatoes.