USATODAY.com – One-third of U.S. kids are out of shape, study finds

USATODAY.com – One-third of U.S. kids are out of shape, study finds: 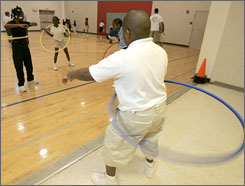 A third of U.S. adolescents are unfit, according to a landmark analysis of health data, and experts say it’s time to get them moving.

Russell Pate, professor of exercise science at the University of South Carolina, and colleagues based their conclusion on the number of kids who wear out quickly on a basic treadmill test.

The researchers also found that overweight teens are more likely to fail a cardiovascular fitness test than those at a normal weight, and males are slightly more likely to meet the fitness standard than females.

The team examined data on 3,287 boys and girls, ages 12 to 19, taken from a large government survey. Teens’ heart rates were measured and oxygen intake was estimated during short treadmill tests.

The more oxygen people can take in during vigorous exercise, the fitter they are and the better their endurance during physical activity, Pate says. Maximum oxygen intake is considered the gold standard for determining cardiovascular fitness, he says.

The data were part of the National Health and Nutrition Examination Survey, a series of periodic surveys that collect height, weight and other information on the U.S. population. Pate says this is the first time this particular data, collected from 1999 and 2002, has been analyzed.

Kids who are unfit are likely to become unfit adults, he says. Cardiovascular fitness reduces the risk of chronic disease and early death, as well as decreasing a person’s ability to chase the dog, climb stairs quickly or play basketball and run without being exhausted, Pate says.

“About half the overweight adolescents failed to meet the fitness standard, but a large majority of the normal weight kids met it,” Pate says. Other findings published in October’s Archives of Pediatrics and Adolescent Medicine:

• The passing rates were no different between ethnic groups.

“These data clearly call for us to redouble our efforts to provide kids with high-quality physical activity in a range of settings from sports to PE classes to recreation programs to home-based activity,” Pate says.

Charlene Burgeson, executive director of the National Association for Sport & Physical Education, a group of physical education and sports professionals, says, “This study reinforces the importance of all youth being physically active, spending minimal time in sedentary activities such as TV watching, and maintaining a healthy weight.

“As a society, it’s time to move past the need to prove that there is a problem and to find ways to actually create environments and a culture where these healthy behaviors are the norm,” Burgeson says.

One-third of children and teens — about 25 million kids — are overweight or on the brink of becoming so, which increases their risk of developing diabetes, high cholesterol, high blood pressure and other illnesses, according to a government survey. James Hill, co-founder of America on the Move, which encourages increased physical activity, says, “This is more evidence that we have a crisis with our children’s health. … It is time for us to devote serious efforts now to get our kids more physically active.”