Two of the worldâ€™s largest drug companies are paying hundreds of millions of dollars to doctors every year in return for giving their patients anemia medicines, which regulators now say may be unsafe at commonly used doses.

By ALEX BERENSON and ANDREW POLLACK
Published: May 9, 2007, NY TIMES 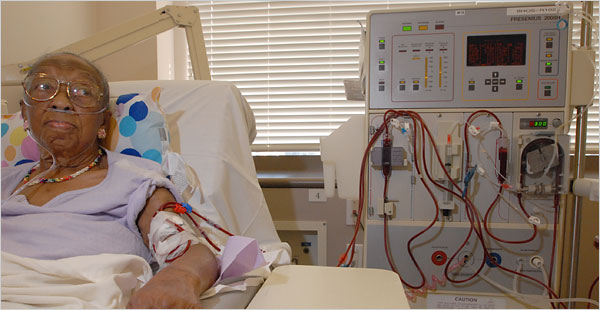 The payments are legal, but very few people outside of the doctors who receive them are aware of their size. Critics, including prominent cancer and kidney doctors, say the payments give physicians an incentive to prescribe the medicines at levels that might increase patientsâ€™ risks of heart attacks or strokes.

Industry analysts estimate that such payments â€” to cancer doctors and the other big users of the drugs, kidney dialysis centers â€” total hundreds of millions of dollars a year and are an important source of profit for doctors and the centers. The payments have risen over the last several years, as the makers of the drugs, Amgen and Johnson & Johnson, compete for market share and try to expand the overall business.

Neither Amgen nor Johnson & Johnson has disclosed the total amount of the payments. But documents given to The New York Times show that at just one practice in the Pacific Northwest, a group of six cancer doctors received $2.7 million from Amgen for prescribing $9 million worth of its drugs last year.

Yesterday, the Food and Drug Administration added to concerns about the drugs, releasing a report that suggested that their use might need to be curtailed in cancer patients. The report, prepared by F.D.A. staff scientists, said no evidence indicated that the medicines either improved quality of life in patients or extended their survival, while several studies suggested that the drugs can shorten patientsâ€™ lives when used at high doses. Yesterdayâ€™s report followed the F.D.A.â€™s decision in March to strengthen warnings on the drugsâ€™ labels.

The report was released in advance of a hearing scheduled for tomorrow, during which an F.D.A. advisory panel will consider whether the drugs are overused.

The medicines â€” Aranesp and Epogen, from Amgen; and Procrit, from Johnson & Johnson â€” are among the worldâ€™s top-selling drugs, with combined sales of $10 billion last year. In this country, they represent the single biggest drug expense for Medicare and are given to about a million patients each year to treat anemia caused by kidney disease or cancer chemotherapy.

Dr. Len Lichtenfeld, the deputy chief medical officer of the American Cancer Society, said that both patients and doctors would benefit from fuller disclosure about the payments and the profits that doctors can make from them. â€œI suspect that Medicare is going to take a very careful look at what is going on here,â€ he said.

Federal laws bar drug companies from paying doctors to prescribe medicines that are given in pill form and purchased by patients from pharmacies. But companies can rebate part of the price that doctors pay for drugs, like the anemia medicines, which they dispense in their offices as part of treatment. The anemia drugs are injected or given intravenously in physiciansâ€™ offices or dialysis centers. Doctors receive the rebates after they buy the drugs from the companies. But they also receive reimbursement from Medicare or private insurers for the drugs, often at a markup over the doctorsâ€™ purchase price.

Medicare has changed its payment structure since 2003 to reduce the markup, but private insurers still often pay more. Combined with those insurance reimbursements, the rebates enable many doctors to profit substantially on the medicines they buy and then give to patients.

The rebates are related to the amount of drugs that doctors buy, and physicians that agree to use one companyâ€™s drugs exclusively typically receive higher rebates.

Johnson & Johnson said yesterday in a statement that its rebates were not intended to induce doctors to use more medicine. Instead, the rebates â€œreflect intense competitionâ€ in the market for the drugs, the company said.

Amgen said that rebates were a normal commercial practice and that it had always properly promoted its drugs.

â€œAmgen is dedicated to patient safety,â€ said David Polk, a spokesman. â€œWe believe our contracts support appropriate anemia management and our product promotion is always strictly within the label.â€

Both companiesâ€™ stocks fell yesterday after release of the F.D.A. report. Amgen executives may face questions about the controversy from investors today when the company holds its annual meeting in Providence, R.I.

American patients receive far more of the anemia drugs than patients elsewhere, with dialysis patients in this country getting doses more than twice as high as their counterparts in Europe. Cancer care shows a similar pattern. American cancer patients are about three times as likely as those in Europe to get the drugs, and they receive somewhat higher doses.

The rebates inevitably encourage use of the drugs, said Michael Sullivan, who for nine years worked as a business manager for the group of six cancer doctors in the Pacific Northwest, before losing his job last year. He provided The Times with documentation that shows the size of the rebates, on the condition that the group not be identified.

â€œPersonally, I think rebates should go away,â€ said Mr. Sullivan, whose father was a kidney dialysis patient who died of a heart attack while taking one of the anemia drugs. â€œThe whole problem with it, I guess, is that youâ€™re playing with peopleâ€™s health. Itâ€™s not the same as buying widgets.â€

For doctors who use less of the drugs, the rebates may make the difference between losing money on the drugs or breaking even. Mr. Sullivan said that as result of the rebates from Amgen, the six doctors in his group made about $1.8 million in net profit on the drugs they prescribed.

Unlike most drugs, the anemia medicines do not come in fixed doses. Therefore, doctors have great flexibility to increase dosing â€” and profits. Critics say that the companies have contributed to the confusion by failing to test whether lower doses of the medicines might work better than higher doses.

â€œThe burden of proof is for companies and industry to demonstrate that a drug is safe at a certain level,â€ Dr. Ajay Singh, an associate professor at Harvard Medical School. Dr. Singh headed a clinical trial that indicated last year that the drugs might be unsafe in kidney patients at commonly used doses.

Known generically as epoetin and darbepoetin, and often referred to simply as EPO, the drugs are genetically engineered versions of a human protein that stimulates the bone marrow to produce more red blood cells and increase the bodyâ€™s ability to carry oxygen.

Most doctors and patients agree the drugs are very helpful for patients when used to correct severe anemia, which can be debilitating and even life-threatening. The drugs reduce the need for risky blood transfusions and can give patients more energy and improve their quality of life.

â€œWe have transformed the lives of patients with chronic kidney disease,â€ said Dr. Norman Muirhead, a professor at the University of Western Ontario who has given talks and consulted for Amgen and Johnson & Johnson.

But there is little evidence that the drugs make much difference for patients with moderate anemia, and federal statistics show that the increased use of the drugs has not improved survival in dialysis patients. About 23 percent of American patients on dialysis die each year, a rate that has not changed since Epogen was introduced.

Anemia is measured by a patientâ€™s level of hemoglobin, the molecule the body uses to transport oxygen to its cells. Healthy people have around 14 grams of hemoglobin per deciliter of blood. Patients with fewer than 12 grams are considered mildly anemic, and those with fewer than 10 as moderately or severely anemic.

The labels on the drugs, as currently approved by the F.D.A., encourage doctors to aim for a hemoglobin level of 10 to 12. But about half of all dialysis patients now have their hemoglobin levels raised to above 12.

Critics of the drugs say their increased use has been driven by profit. DaVita, one of the two large dialysis chains, and the most aggressive user of epoetin, gets 25 percent of its revenue from the anemia drugs â€” and even more of its profit, according to some analysts.

Dr. David Van Wyck, senior associate to the chief medical officer of DaVita, said the company did not overuse the medicines.

Doctors determine how much to use, Dr. Van Wyck said. â€œTo say that somebody is encouraging a doc to use more EPO is just outrageous.â€

Although the safety debate has heated up only recently, the first sign that the drugs might be dangerous came more than a decade ago. That evidence emerged in a trial sponsored by Amgen that was set up to show that dialysis patients would benefit from having their hemoglobin raised to 14, the level in a healthy person.

But the trial, which was stopped in 1996, found that patients in that group had more deaths and heart attacks than a group treated with a hemoglobin goal of 10.

That trial should have discouraged doctors from using too much epoetin and encouraged Amgen to study the risks further, said Dr. Steven Fishbane, a nephrologist at Winthrop-University Hospital on Long Island.

Instead, use of epoetin continued to soar. No one conducted a trial to determine whether the optimal hemoglobin target in kidney patients might be 10 or 11, instead of 12 or 13 â€” a crucial question that remains unanswered even today.

Dr. Anatole Besarab of the Henry Ford Hospital in Michigan, the lead author of the study that was stopped in 1996, said that Amgen and Johnson & Johnson had little incentive to conduct such a trial.

Dr. Robert M. Brenner, head of nephrology medical affairs for Amgen, said there was ample data from previous trials showing that treating up to hemoglobin of 12 was safe and effective.

Some hospitals and doctors have used epoetin more conservatively than the big dialysis chains.

Dr. Ronald A. Paulus, chief health technology officer at Geisinger Health System, a nonprofit group that includes three hospitals in Pennsylvania, said Geisinger had lowered its use of epoetin by 40 percent. Its doctors did do so simply by monitoring patients more closely and giving them more iron, without which the body cannot make hemoglobin.

Dr. N. D. Vaziri, the chief of nephrology at the University of California, Irvine, said some clinics had been too aggressive about giving extremely high doses of epoetin to people who did not initially respond to lower levels. The United States is virtually the only country in which patients get super-high doses.

â€œYou create a toxicity situation,â€ said Dr. Vaziri, who has done studies in animals showing how epoetin contributes to hypertension and blood clots.

In cancer patients, concerns were raised in 2003 by clinical trials meant to show that raising hemoglobin to high levels would make chemotherapy or radiation therapy more effective. Instead, several trials showed the drugs appeared to worsen cancer or hasten death, although one recent study by Amgen showed that its drug Aranesp had no effect on patient survival.

The conflicting studies are among the issues the F.D.A. advisory committee is expected to discuss tomorrow. Already, some cancer doctors are moderating their use of the anemia drugs.

Dr. Peter Eisenberg, an oncologist in Marin County, Calif., said many doctors had been induced to use more epoetin by the financial incentives and the belief that the drug was helpful.

â€œThe deal was so good,â€ he said. â€œThe indication was so clear and the downside was so small that docs just worked it into their practice easily.

â€œNow itâ€™s much scarier than that,â€ he said. â€œWe could really be doing harm.â€