Logic Dictates a Powerful Genetic Force at Work in Obesity

It was 1959. Jules Hirsch, a research physician at Rockefeller University, had gotten curious about weight loss in the obese. He was about to start a simple experiment that would change forever the way scientists think about fat. 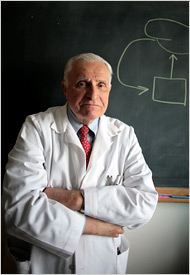 Obese people, he knew, had huge fat cells, stuffed with glistening yellow fat. What happened to those cells when people lost weight, he wondered. Did they shrink or did they go away?

He decided to find out.It seemed straightforward. Dr. Hirsch found eight people who had been fat since childhood or adolescence and who agreed to live at the Rockefeller University Hospital for eight months while scientists would control their diets, make them lose weight and then examine their fat cells.The study was rigorous and demanding. It began with an agonizing four weeks of a maintenance diet that assessed the subjects™ metabolism and caloric needs. Then the diet began. The only food permitted was a liquid formula providing 600 calories a day, a regimen that guaranteed they would lose weight. Finally, the subjects spent another four weeks on a diet that maintained them at their new weights, 100 pounds lower than their initial weights, on average.

Dr. Hirsch answered his original question ” the subjects™ fat cells had shrunk and were now normal in size. And everyone, including Dr. Hirsch, assumed that the subjects would leave the hospital permanently thinner. That did not happen. Instead, Dr. Hirsch says, œthey all regained. He was horrified. The study subjects certainly wanted to be thin, so what went wrong? Maybe, he thought, they had some deep-seated psychological need to be fat. So Dr. Hirsch and his colleagues, including Dr. Rudolph L. Leibel, who is now at Columbia University, repeated the experiment and repeated it again. Every time the result was the same. The weight, so painstakingly lost, came right back. But since this was a research study, the investigators were also measuring metabolic changes, psychiatric conditions, body temperature and pulse. And that led them to a surprising conclusion: fat people who lost large amounts of weight might look like someone who was never fat, but they were very different. In fact, by every metabolic measurement, they seemed like people who were starving

.Before the diet began, the fat subjects™ metabolism was normal ” the number of calories burned per square meter of body surface was no different from that of people who had never been fat. But when they lost weight, they were burning as much as 24 percent fewer calories per square meter of their surface area than the calories consumed by those who were naturally thin.The Rockefeller subjects also had a psychiatric syndrome, called semi-starvation neurosis, which had been noticed before in people of normal weight who had been starved. They dreamed of food, they fantasized about food or about breaking their diet. They were anxious and depressed; some had thoughts of suicide. They secreted food in their rooms. And they binged.The Rockefeller researchers explained their observations in one of their papers: œIt is entirely possible that weight reduction, instead of resulting in a normal state for obese patients, results in an abnormal state resembling that of starved nonobese individuals.

Eventually, more than 50 people lived at the hospital and lost weight, and every one had physical and psychological signs of starvation. There were a very few who did not get fat again, but they made staying thin their life™s work, becoming Weight Watchers lecturers, for example, and, always, counting calories and maintaining themselves in a permanent state of starvation.œDid those who stayed thin simply have more willpower? Dr. Hirsch asked. œIn a funny way, they did.One way to interpret Dr. Hirsch and Dr. Leibel™s studies would be to propose that once a person got fat, the body would adjust, making it hopeless to lose weight and keep it off. The issue was important, because if getting fat was the problem, there might be a solution to the obesity epidemic: convince people that any weight gain was a step toward an irreversible condition that they most definitely did not want to have.

But another group of studies showed that that hypothesis, too, was wrong.It began with studies that were the inspiration of Dr. Ethan Sims at the University of Vermont, who asked what would happen if thin people who had never had a weight problem deliberately got fat.His subjects were prisoners at a nearby state prison who volunteered to gain weight. With great difficulty, they succeeded, increasing their weight by 20 percent to 25 percent. But it took them four to six months, eating as much as they could every day. Some consumed 10,000 calories a day, an amount so incredible that it would be hard to believe, were it not for the fact that there were attendants present at each meal who dutifully recorded everything the men ate.Once the men were fat, their metabolisms increased by 50 percent. They needed more than 2,700 calories per square meter of their body surface to stay fat but needed just 1,800 calories per square meter to maintain their normal weight. When the study ended, the prisoners had no trouble losing weight. Within months, they were back to normal and effortlessly stayed there.The implications were clear. There is a reason that fat people cannot stay thin after they diet and that thin people cannot stay fat when they force themselves to gain weight.

The body’s metabolism speeds up or slows down to keep weight within a narrow range. Gain weight and the metabolism can as much as double; lose weight and it can slow to half its original speed.That, of course, was contrary to what every scientist had thought, and Dr. Sims knew it, as did Dr. Hirsch.The message never really got out to the nation™s dieters, but a few research scientists were intrigued and asked the next question about body weight: Is body weight inherited, or is obesity more of an inadvertent, almost unconscious response to a society where food is cheap, abundant and tempting? An extra 100 calories a day will pile on 10 pounds in a year, public health messages often say. In five years, that is 50 pounds.

The assumption was that environment determined weight, but Dr. Albert Stunkard of the University of Pennsylvania wondered if that was true and, if so, to what extent. It was the early 1980s, long before obesity became what one social scientist called a moral panic, but a time when those questions of nature versus nurture were very much on Dr. Stunkard’s mind. He found the perfect tool for investigating the nature-nurture question ” a Danish registry of adoptees developed to understand whether schizophrenia was inherited. It included meticulous medical records of every Danish adoption between 1927 and 1947, including the names of the adoptees™ biological parents, and the heights and weights of the adoptees, their biological parents and their adoptive parents.Dr. Stunkard ended up with 540 adults whose average age was 40. They had been adopted when they were very young ” 55 percent had been adopted in the first month of life and 90 percent were adopted in the first year of life.

His conclusions, published in The New England Journal of Medicine in 1986, were unequivocal. The adoptees were as fat as their biological parents, and how fat they were had no relation to how fat their adoptive parents were.The scientists summarized it in their paper: œThe two major findings of this study were that there was a clear relation between the body-mass index of biologic parents and the weight class of adoptees, suggesting that genetic influences are important determinants of body fatness; and that there was no relation between the body-mass index of adoptive parents and the weight class of adoptees, suggesting that childhood family environment alone has little or no effect.In other words, being fat was an inherited condition.Dr. Stunkard also pointed out the implications: œCurrent efforts to prevent obesity are directed toward all children (and their parents) almost indiscriminately. Yet if family environment alone has no role in obesity, efforts now directed toward persons with little genetic risk of the disorder could be refocused on the smaller number who are more vulnerable. Such persons can already be identified with some assurance: 80 percent of the offspring of two obese parents become obese, as compared with no more than 14 percent of the offspring of two parents of normal weight.A few years later, in 1990, Dr.

Stunkard published another study in The New England Journal of Medicine, using another classic method of geneticists: investigating twins. This time, he used the Swedish Twin Registry, studying its 93 pairs of identical twins who were reared apart, 154 pairs of identical twins who were reared together, 218 pairs of fraternal twins who were reared apart, and 208 pairs of fraternal twins who were reared together.The identical twins had nearly identical body mass indexes, whether they had been reared apart or together. There was more variation in the body mass indexes of the fraternal twins, who, like any siblings, share some, but not all, genes.The researchers concluded that 70 percent of the variation in peoples™ weights may be accounted for by inheritance, a figure that means that weight is more strongly inherited than nearly any other condition, including mental illness, breast cancer or heart disease.The results did not mean that people are completely helpless to control their weight, Dr. Stunkard said. But, he said, it did mean that those who tend to be fat will have to constantly battle their genetic inheritance if they want to reach and maintain a significantly lower weight.The findings also provided evidence for a phenomenon that scientists like Dr. Hirsch and Dr. Leibel were certain was true ” each person has a comfortable weight range to which the body gravitates. The range might span 10 or 20 pounds: someone might be able to weigh 120 to 140 pounds without too much effort. Going much above or much below the natural weight range is difficult, however; the body resists by increasing or decreasing the appetite and changing the metabolism to push the weight back to the range it seeks.The message is so at odds with the popular conception of weight loss ” the mantra that all a person has to do is eat less and exercise more ”.

Dr. Jeffrey Friedman, an obesity researcher at the Rockefeller University, tried to come up with an analogy that would convey what science has found about the powerful biological controls over body weight.He published it in the journal Science in 2000 and still cites it:œThose who doubt the power of basic drives, however, might note that although one can hold one™s breath, this conscious act is soon overcome by the compulsion to breathe, Dr. Friedman wrote. œThe feeling of hunger is intense and, if not as potent as the drive to breathe, is probably no less powerful than the drive to drink when one is thirsty. This is the feeling the obese must resist after they have lost a significant amount of weight.This is an excerpt from Gina Kolata™s new book, œRethinking Thin: The New Science of Weight Loss ” and the Myths and Realities of Dieting (Farrar, Straus & Giroux).