Robot to carry out heart surgery
A robotic arm able to carry out an intricate life-saving heart operation is being pioneered by UK surgeons. 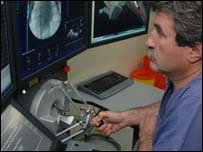 The robot is used to guide thin wires through blood vessels in the heart to treat a fast or irregular heartbeat.

Doctors at St Mary’s Hospital in London say it will reduce risk for patients and increase the number of procedures they can carry out.

More than 20 patients have been operated on with the robot, which is only one of four in use in the world.

In the UK a shortage of expertise means there are too few centres where highly complex cases can be carried out
Dr Wyn Davies
During the procedure, known as catheter ablation, several thin wires and tubes are inserted through a vein in the groin and guided into the heart where they deliver an electric current to specific areas of heart muscle.

The electric current destroys tiny portions of heart tissue which are causing the abnormal heartbeat.

With the Sensei robot, surgeons use a joystick on a computer console to more accurately position and control the wires, which often need to be placed in locations that are difficult to reach.

In the future the system could be automated so the robot guides the wires to a point in the heart selected by the doctor from images on a computer screen.

When done by hand the operation is highly skilled and a shortage of clinicians able to carry out the surgery means only 10% of people with the condition, called atrial fibrillation, are treated this way.

Tony Blair underwent the operation by hand in 2004.

Around 50,000 people develop atrial fibrillation, which is a major cause of strokes and heart failure, every year and it has been calculated to cost the NHS almost 1% of its entire annual budget.

Numbers are expected to increase even more due to an ageing population, a rising number of people with chronic heart disease and better diagnosis.

St Mary’s consultant cardiologist, Dr Wyn Davies, said: “In the UK a shortage of expertise means there are too few centres where highly complex cases can be carried out.

“The robot allows accuracy and control of catheter movement which cannot currently be achieved without a skill level that usually takes considerable time to acquire.”

“The attraction is the potential for automation – we can get details about the patient’s heart anatomy from CT scans, then on the computer draw where you want the ablation delivered and hit return.”

He added that full automation was a few years away but he could envisage a scenario where a skilled operator could oversee multiple operations happening at once.

“It’s like threading cotton through a very fine needle and with this new device it should be much easier and quicker to carry out and to train doctors to do it.”

Professor Peter Weissberg, medical director of the British Heart Foundation, said: “Through research we have learned that abnormal heart rhythms, like atrial fibrillation, are caused by a handful of rogue cells.

“Extreme precision is required to track down and deal with these cells without damaging healthy tissue.

“The early promising results suggest that this approach may greatly improve the treatment of some patients with atrial fibrillation.”
http://newsimg.bbc.co.uk/media/images/44010000/jpg/_44010160_cathlabrobot203.jpg