Polyphenols are phytochemicals, meaning compounds found abundantly in natural plant food sources that have antioxidant properties. There are over 8,000 identified polyphenols found in foods such as tea, wine, chocolates, fruits, vegetables, and extra virgin olive oil,1 just to name a few. 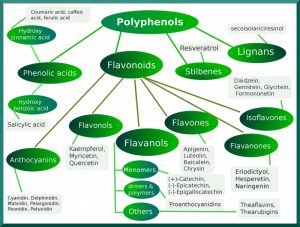 Polyphenols play an important role in maintaining your health and wellness.

Antioxidants as a group help protect the cells in your body from free radical damage, thereby controlling the rate at which you age.

If your body does not get adequate protection, free radicals can become rampant, causing your cells to perform poorly. This can lead to tissue degradation and put you at risk of diseases such as heart disease, cancer, and Alzheimer’s disease, for example.

Antioxidants  can be divided into three major groups:

Polyphenols can be further broken down into four categories, with additional subgroupings5,6 based on the number of phenol rings they contain, and on the basis of structural elements that bind these rings to one another.

As a general rule, foods contain complex mixtures of polyphenols, with higher levels found in the outer layers of the plants than the inner parts:

The Role of Polyphenols in Plants and Humans

Polyphenols give fruits, berries, and vegetables their vibrant colors, and contribute to the bitterness, astringency, flavor, aroma, and oxidative stability of the food. In the plant, they protect against ultraviolet radiation, pathogens, oxidative damage, and harsh climatic conditions.

In the human body, polyphenols have diverse biological properties, including:

How to Optimize the Polyphenol Content of Your Diet

By far the most studied and understood polyphenol group is the flavonoids — compounds found in red wine and dark chocolate. However, no one polyphenol is necessarily better than the rest.

To optimize the benefits of these natural health boosting agents, it’s important to eat a wide variety of foods that are rich in polyphenols. High-quality seasonings, raw fruits, vegetables, and seeds are among the richest sources.

However, there’s also the issue of bioavailability, i.e. how well your body can absorb the nutrients contained in the food. One of the interesting facts about polyphenols is that they are fat soluble. This means that you should take them with fats in your diet or they won’t absorb as readily.

Eating a diet rich in healthy fats will optimize the amount of polyphenols your body can absorb. How the plant is grown can also influence its healing potential. As noted in a 2004 paper, agricultural practices and industrial processes can reduce the health effects of the polyphenols in the food.

The European Journal of Clinical Nutrition has published a list of the 100 richest dietary sources of polyphenols, based on milligrams (mg) per 100 grams (g) or 100 mg of food. Below are 20  foods topping that list:

The Benefits of Berries

As you can see, herbs and spices are as a general rule very high in polyphenols, so you can’t really go wrong by adding them liberally to your cooking. Berries of all sorts and colorful fruits and vegetables are also an excellent source. They’re also ideal as they tend to be low in fructose, and therefore will not significantly raise your insulin level and contribute to insulin resistance. As noted by the Epoch Times:

“[B]erries are some of the most disease preventive foods on the planet … their high levels of polyphenols and other nutrients provide health benefits from head to toe … One of the most remarkable gifts from berries is the protection they afford your heart, which results mostly from their anthocyanin content.

A study published in the Journal of the Academy of Nutrition & Dietetics involving high-risk postmenopausal women found that consuming one cup of blueberries daily for eight weeks reduced blood pressure and arterial stiffness, possibly due to increased nitric oxide production.

Women who consume more than 3 servings of blueberries and strawberries per week were found to have a 32 percent lower risk of heart attack. One cup of mixed berries per day has been shown to lower blood pressure and raise beneficial HDL. Blueberries offer additional protection from type 2 diabetes by stabilizing blood sugar levels and improving insulin sensitivity.”

Many different extracts from grape seeds, grape skin, or olive pulp are used in the production of supplements. However, just because these supplements are made from natural ingredients doesn’t mean that taking them in large amounts is safe or advisable. Research has revealed that taking large amounts of polyphenol supplements may cause:

Eating a well-balanced diet, rich in polyphenols, reduces the potential you’ll consume more of the micronutrients than your body requires. If you do opt for a supplement, be aware that polyphenol supplements will contain a variety of different compounds, depending upon the supplement you choose. It’s important to trust the company you purchase your supplements from, to read the package directions carefully, and avoid taking excess amounts.

There is ongoing research evaluating the 8,000-plus different polyphenols that have so far been identified. The completed studies give you a good indication of how important these micronutrients are to your overall health.

Dr. Yves Desjardins: Effect of polyphenols on the gut microbiota and their effect on metabolic di…

Your gastrointestinal tract plays an important role in your health. Some 100 trillion bacteria, fungi, and viruses make up the microbiome and flora living in your gut, and it has become very clear that these organisms play critical roles in your mental and physical health, from your brain, skin, and internal organs, to your neurological system, weight, mood, and beyond. Doctors and researchers now consider the microbiome as one of the most complex organs in your body.

The microorganisms in your gut outnumber the cells in your body by 10 to 1 and play a role in the protection against, or prevention of cancer, obesity, diabetes, neurological disorders, allergies, and mood disorders. You can improve the variety and performance of your gut microbes by eating fermented foods, which will repopulate your gut naturally, or by taking a probiotic supplement.

But recent research shows that plant polyphenols also influence and modulate your gut microbiota. The video presentation above, given by the Canadian Institute of Nutrition and Functional Food, explains the paradigm shift in understanding the effect of polyphenols on diseases by way of modulating gut microbes.

Polyphenols appear to have a prebiotic effect by improving the nutrition of beneficial bacteria living in your gut. Much of the research has been done on green tea, which plays an important role on balancing your gut flora by not only increasing the good bacteria but also reducing the number of bad bacteria. Research has also found improvements in gut flora with consumption of red wine and chocolate in moderation.

In previous research, obese individuals were found to have about 20 percent more of a family of bacteria known as firmicutes, and almost 90 percent less of a bacteria called bacteroidetes than lean people. Firmicutes help your body to extract calories from complex sugars and deposit those calories in fat. This is one explanation for how the microflora in your gut may affect your weight. As it turns out, firmicutes and bacteroidetes are two types of bacteria influenced by polyphenols.

“[P]polyphenols may be converted by the colonic microbiota to bioactive compounds that can affect the intestinal ecology and influence host health.

There is evidence from in vitro animal and human studies that certain doses of selected polyphenols may modify the gut microbial composition, and while certain bacterial groups can be inhibited, others can thrive in the available niche of the ecosystem. Phenolic compounds alter gut microbiota and, consequently, alter the Bacteroides/Firmicutes balance.”

Bifidobacteria and lactobacillus bacteria are also helpful for weight management, and help keep potentially harmful bacteria in check. One previous study found that children with high numbers of bifidobacteria appeared to be protected from excess weight gain.

On average, the bifidobacteria counts were twice as high in healthy weight children, as in those who became overweight by the age of 7. Certain lactobacillus strains have also been linked to improved mood and reduced anxiety- and depression-related behavior.

The featured study also notes that:

“[P]roanthocyanidin-rich extract from grape seeds given to healthy adults for two weeks was able to significantly increase the number of bifidobacteria … Vendrame et al. found a significant increase in the amount of Bifidobacterium after the consumption of a wild blueberry drink, suggesting an important role of the polyphenol present in wild blueberries on the intestinal microbiota composition modulation …

[R]ecent studies indicate that monomeric flavan-3-ols and flavan-3-ol-rich sources such as chocolate, green tea, and blackcurrant or grape seed extracts may modulate the intestinal microbiota in vivo, producing changes in beneficial bacteria such as Lactobacillus spp. but inhibiting other groups such Clostridium spp. in both in vivo and in vitro studies…”

Make Polyphenol-Rich Foods a Part of Your Daily Diet

It is generally recognized that polyphenols are powerful nutrients that protect your health by fighting against free radicals in your body and preventing damage from oxidation. Free radicals are highly reactive molecules that steal electrons from the first thing they encounter, such as a cell wall, or a strand of DNA.

The loss of an electron, in turn, oxidizes these cells, which makes them unstable and easily breakable. As this free-radical damage continues, cells can no longer perform properly, and hence, tissues begin to degrade and disease sets in.

And yet, you still need some free radicals, as your body uses them as vitally important signaling molecules, and if they were all eliminated you would die very shortly. They also play a role in your immune system, attacking foreign invaders and pathogenic bacteria.

Eliminating most of them, or shooting for complete eradication, can lead to the opposite problem of actually creating more damage. Free radicals are a natural byproduct of breathing; antioxidants mop up the excess and leave the rest to fulfill their other functions. This fine balancing act can be easily tipped to the point of either too much or too little.

So what’s the answer? The answer is, “Yes, you do need antioxidants,” but you need to make sure you’re getting them from the right sources — from the food you eat. A diet rich in fruits, vegetables, and nuts, will usually supply you with the antioxidants needed to walk this fine line. One reason why a varied diet of REAL food works better than simply taking antioxidant supplements is the fact that the isolated antioxidant may not be the exact one your body needs at that moment.

Fruits and veggies, however, are rich in antioxidants such as polyphenols, but they also contain hundreds of other chemicals, creating a synergistic effect where the total benefit is far greater than the sum of its parts. Simple and easy ways to boost the healthy antioxidants in your diet is to juice a wide variety of vegetables, eating fresh berries and nuts, and liberally adding herbs and spices to your cooking.

Keeping and Eye on Genetic Modification →
← Just Saying “We have the science.” Is not enough.