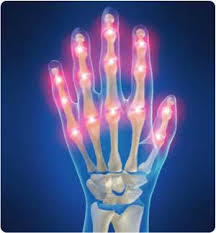 Arthritis is well known to affect millions of Americans, but what is staggering is that estimates from the National Health Interview Survey tell us that 25 percent of adults aged 18 years and older will suffer from this disease. When one thinks of arthritis, immediately the word pain comes to mind. The reason for this is simple: at the core level, arthritis is entrenched in localized inflammation that results in debilitating pain. Typically, joints and connective tissue are painfully affected rendering the afflicted individual with limited mobility. In general, the severity of symptoms depends upon the type of arthritis from which one suffers – whether it is osteoarthritis or rheumatoid arthritis.

Basically, rheumatoid arthritis is considered an autoimmune disease (immune system attacks healthy tissue) characterized by crippling pain and stiffness around one or more of the smaller joints in the hands, wrist and feet. On the other hand, osteoarthritis is the most common form of arthritis that usually causes significant pain and decreased mobility of the larger weightbearing joints, such as the hips and knees (aka degenerative joint disease). It is also characterized by an increased breakdown of the cushion found between the bones at a joint known as cartilage. In both forms, elevation of chemical messengers that are proinflammatory from immune response (cytokines such as Il-1, Il-6, Il-8 and Il- 12) and “bad” prostaglandins (the messenger molecules that influence pain and inflammation, and are greatly influenced by omega-6 fats in the diet) are commonly found.

While we have accomplished a great deal over the past few decades and better understand the mechanisms to help manage arthritis, many models of standard therapy have failed to produce reliable, safe, effective treatment protocols that address this multifaceted problem. So, it is of no surprise that many people turn to more natural and complimentary approaches utilizing nutrient therapy (vitamins, minerals, phytonutrients, homeopathics and herbs), diet modification, chiropractic, acupuncture, yoga, physical therapy, massage and meditation. For the purposes of this article, I will focus on the nutritional aspects of helping to treat and manage both forms of arthritis. As with all diseases, there are no single magic bullets and we must view this illness with a three-pronged approach to reduce inflammation (pain), repair and rebuild cartilage, and modulate (not stimulate) and support appropriate immune response.

With either form of arthritis, when injury to the joints and joint space occur, an inflammatory process begins causing redness, pain, heat and swelling resulting in loss of function to the injured area. Immediately after a tissue is affected, blood vessels in the area dilate, which causes more heat, redness and swelling. More than the swelling and heat, pain is the red flag that the joint or tissue is injured and inflamed. Typically, NSAIDS (non steroidal anti-inflammatory drugs) are the first line of attack and are used more than any other medication. Unfortunately, with long-term use, undesirable effects such as gastrointestinal problems, ulcers and even serious kidney and liver damage are common and, therefore, not a good option. An alternative is the use of steroids to halt inflammation. While commonly prescribed steroids such as cortisone and prednisone do the job, chronic use actually has an opposite effect – steroids can actually slow down and stop the healing process by negatively affecting the production of collagen. For these reasons, many practitioners are now employing other options to reduce the pain and inflammation symptoms of arthritis, and the number of people seeking natural approaches is growing.

First and foremost, one needs to follow an anti-inflammatory diet:

Eat healthy fats such as olive oil and oily fish. Absolutely avoid any and all trans fats (aka partially hydrogenated oils) still found in many packaged foods and fried foods. Eat walnuts and fish like salmon, which are rich in omega-3s, and avoid high amounts of omega-6 fats such as corn, safflower, cottonseed, etc., oils – remember that these types of fats can turn on the “bad” prostaglandins that cause inflammation.

Eat plenty of dietary polyphenols and bioflavonoids found in dark-colored fruits and vegetable.

Eat plenty of low-starch vegetables, such as broccoli, cauliflower, green beans and salad greens, that are known to contain several anti-inflammatory nutrients.

Lastly, explore an elimination diet that will pinpoint any food allergies that can exacerbate inflammation and pain. Some people highly react to the nightshade family of foods including tomato, eggplant, peppers and white potato.

Dietary changes may not be enough to control the pain and inflammation, so using therapeutic amounts of nutrients may be necessary. In addition, other compounds not normally present in diets may alleviate the inflammatory/pain process, and this is where supplementation enters the picture. When used together, dietary intervention and the use of supplements listed below can deliver a one-two punch against inflammation and pain:

Tumeric – the active curcuminoids found in this herb inhibit the breakdown of arachidonic acid, a potent pro-inflammatory fat, and decrease the activity of inflammatory messengers from the immune system (Il-6, Il-8)

Boswellia – active components in this herb such as 5-loxin, inhibit the COX enzyme pathway and also reduce proinflammatory prostaglandins

Quercitin – inhibits pro-inflammatory immune messengers such as Il-8, and quercitin and other bioflavonoids also have strong antioxidant properties and help modulate enzyme reactions in the inflammatory process

Enzymes – such as pancreatin, papain, bromelain, trypsin and chymotrypsin are proteolytic systemic enzymes that support the body’s natural appropriate response to inflammation and block inflammatory messengers, helping to break down damaged tissue and decrease swelling

Not only does joint cartilage thin as we age, it is the hallmark of arthritis – especially osteoarthritis. While the plan is to lower and control the inflammatory response, the next task is to start to repair and rebuild new tissue – especially cartilage.

Cartilage is the flexible connective tissue that functions as the cushion for the joints and is one of the key components to attract water to the other larger macromolecules to keep the joint soft and flexible. While cartilage is a complex structure of importance, collagen is one of the main proteins in cartilage that also requires nutritional support. Collagen proteins are interwoven to make up the bulk of the cartilage in the joint spaces and responsible for making it tough, flexible and cushiony. So, in addition to the anti inflammatory diet recommendations listed above, one will need to focus on nutrient support that addresses the maintenance and repair of both collagen and cartilage.

Over the past few decades, glucosamine and chondroitin have been two of the most researched nutrients. Numerous studies examining the effects of glucosamine and chondroitin over short periods of time have indicated that patients experienced more pain reduction similar to improvements experienced by taking NSAIDS. The results from several well-designed scientific studies suggest that these compounds help to reduce not only pain, but also swelling and stiffness, and improved mobility and function when taken for several months. Interestingly, in the 2006 Glucosamine/Chondroitin Arthritis Intervention Trial (GAIT), sponsored by the National Institutes of Health, conflicting results were demonstrated. However, in recent years, several randomized controlled studies have assessed the structure-modifying effect of glucosamine sulfate and chondroitin sulfate by measuring joint space narrowing over years. There is evidence to suggest the usefulness and structuremodifying effect of glucosamine sulfate and chondroitin sulfate.

In addition to glucosamine and chondroitin, explore these ideal candidates:

Methylsulfonylmethane (MSM) – A naturally occurring sulfur-containing compound that is an essential component for healthy joints as sulfur is necessary to build collagen, clinical trials with MSM have been conflicting, but some have demonstrated benefit to patients with osteoarthritis with significantly reduced pain and improved physical functioning.

Hyaluronan – Aside from its reported anti-inflammatory effects, hyaluronan is a glycosaminoglycan and an integral component of both synovial fluid and cartilage (found abundantly in the viscous fluid within joint tissue). It helps to cushion joints against compression and helps signal cells to synthesize new components to replace those that eventually will wear out.

SOD: Superoxide dismutase (GliSODin®) – This is the only orally effective form of SOD backed up by several human published studies. One of which demonstrated that GliSODin had a significant role to play as an anti-inflammatory (reduces inflammatory cytokines) agent lowering, which plays a role in arthritis. While this nutrient could have easily been placed in the anti-inflammatory group above, SOD’s role in health, maintenance and repair of tissue for those with arthritis is critical. In addition, this form of SOD also has been shown to up-regulate total antioxidant defense in the cell in efforts to ward off further damage.

Bioflavonoids – Via their antioxidant properties, they affect the structure of collagen by protecting it from free radical damage and denaturing collagen fibers.

Honorable mentions – all of the antioxidants – both water and fat-soluble.

In addition to the dietary and supplement recommendations to explore, starting a program of regular exercise as well as positive thinking and meditation is highly recommended. This combination may be just what customers need to turn the tide against further progression of the disease. If possible, find a complimentary physician willing to work with you to incorporate the tools and other modalities available. Lastly, continue to educate and utilize the enormous benefits that diet, nutrition, exercise and relaxation therapy can afford.