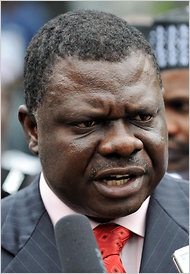 Pfizer Inc Go to your Portfolio » Pfizer, the world’s largest drug company, denied the cable’s allegation, which was contained in documents released by WikiLeaks. The cable indicated that the information alleging corruption on the part of the attorney general was spread through the media to publicly pressure him to drop the lawsuits.

‘Any notion that the company hired investigators in connection to the former attorney general is simply preposterous,’ Christopher Loder, a spokesman at Pfizer’s New York headquarters, said on Friday.

The former attorney general, Michael K. Aondoakaa, told The Associated Press that he knew nothing of any Pfizer attempt to investigate him. ‘If they were doing it behind my back, it’s very unfortunate,’ he was quoted as saying.

Last fall, Mr. Aondoakaa dismissed a $6 billion lawsuit and criminal charges as part of a settlement agreement with Pfizer, after allegations that the drug maker’s experiment with antibiotics resulted in the deaths of Nigerian children. Pfizer contested the cause of the children’s deaths, but ultimately settled with the country for $75 million in one case, according to a Pfizer filing in November. Mr. Loder said the money was to pay Nigeria’s lawyers in the case.

Last year, the Nigerian state of Kano, where the experiments occurred, also accepted a $75 million settlement to drop criminal charges and a civil suit seeking more than $2 billion. Mr. Aondoakaa was not involved in the Kano settlement.

‘According to Liggeri,’ the cable says, ‘Pfizer had hired investigators to uncover corruption links to federal attorney general Michael Aondoakaa to expose him and put pressure on him to drop the federal cases. He said Pfizer’s investigators were passing this information to local media.’

The cable continued: ‘A series of damaging articles detailing Aondoakaa’s ‘alleged’ corruption ties were published in February and March. Liggeri contended that Pfizer had much more damaging information on Aondoakaa and that Aondoakaa’s cronies were pressuring him to drop the suit for fear of further negative articles.’

In seeking comment, Pfizer would say only that Mr. Liggeri was still employed as a manager in Nigeria, but it would not say whether the company had talked with him since the cable became public. Mr. Aondoakaa was not charged with any offenses.

Another part of the cable covers discussions a week earlier with Mr. Liggeri and two Pfizer lawyers about the state settlement, which had been tentatively reached even as federal negotiations continued. That part of the cable appears to accurately reflect the details of the state settlement announced in July 2009. It included $35 million for the families, $30 million for state health care programs and $10 million in legal fees.

Pfizer was sued in Nigeria after reports that it had tested an experimental antibiotic called Trovan on 100 children during a 1996 meningitis epidemic. Another 100 children were given an approved antibiotic, ceftriaxone. Families later charged they had not been properly informed and that the standard antibiotic dose was too low. Some children died and others suffered brain damage, paralysis, deafness or blindness during the trial, first disclosed by The Washington Post.

Pfizer said its researchers acted ethically. The company said deaths and injuries were caused by the meningitis, an inflammation of membranes covering the brain and spinal cord.

In the leaked cable, the embassy describes Mr. Liggeri and two Pfizer lawyers briefing the ambassador and an economics deputy about the state settlement. In a meeting, ‘EconDep,’ who was not otherwise identified, met with Mr. Liggeri. In addition to referring to Mr. Aondoakaa, the cable says Mr. Liggeri complained the lawsuits were ‘wholly political in nature.’.

Mr. Liggeri, contacted by e-mail early Saturday morning in Nigeria, declined to comment on the cable and referred questions to a spokesman at Pfizer headquarters.

The cable was first published Friday by the British newspaper The Guardian and the Spanish newspaper El Pais.

Controlling Computers with Your Mind →
← Snoring Remedy Often a Matter of Trial and Error – NYTimes.com
2 Comments