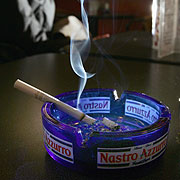 SAN FRANCISCO — Scientists at an influential California agency have concluded that secondhand smoke causes breast cancer, a finding that could have broad impact on cancer research and lead to even tougher anti-smoking regulations.

Overall, women exposed to secondhand smoke have up to a 90% greater risk of breast cancer, the report says.

Although recent studies have linked smoking to breast cancer, no major public health group, including the American Cancer Society, the Centers for Disease Control and Prevention and the National Cancer Institute, has declared it a cause of the disease that kills 40,000 women each year in the USA.

The finding by scientists for the Air Resources Board — whose early efforts to regulate auto emissions were a model for the rest of the country — could fuel workplace smoking bans in more states. And it is likely to refocus the scientific debate over the link between smoking and breast cancer. (Related story: Firestorm could be brewing)

“I have to say without reservation it will stimulate continued and accelerated scientific evaluation of the smoking and breast cancer issue,” says Terry Pechacek, associate director for science in the CDC’s office on smoking and health.

A scientific review panel is expected to approve the report as early as Monday and forward it to the Air Resources Board, which has broad state authority to regulate air pollution.

The conclusion that secondhand smoke causes breast cancer, particularly in younger women, challenges conventional scientific thinking because most studies, until recently, had found no connection between female smokers and breast cancer.

But California scientists based their conclusion on recent human studies that they determined had more careful assessments of long-term exposure to tobacco smoke. The report also gave more weight to toxicology evidence from animal studies than previous studies by the surgeon general and others. It’s well-documented that chemicals from cigarettes cause breast cancer in lab animals.

The report did not estimate the number of additional new breast cancer cases annually, and scientists did not calculate risk levels based on doses of secondhand smoke.

Tobacco companies, in public comments filed with the board, say the report gives little weight to studies that found no breast cancer connection.

A new surgeon general’s report on secondhand smoke is expected this year.

“It’s controversial,” Samet says. “Concluding that passive smoke causes breast cancer has potentially powerful implications for tobacco control and breast cancer control. So there has been tension over it.”