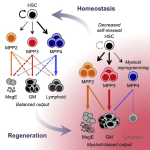 University of California San Francisco scientists have identified characteristics of a family of daughter cells, called MPPs, which are the first to arise from stem cells within bone marrow that generate the entire blood system. The researchers state that the discovery raises the possibility that, by manipulating the fates of MPPs or parent stem cells the medical community could one day help overcome imbalances and deficiencies that can arise in the blood system due to aging or in patients with specific types of leukemia.  The opensource study is published in the journal Cell Stem Cell.

The current study determined that adaptation to the body’s need to produce different mixes of blood cells at different times starts at the top of this hierarchy, with the hematopoietic stem cell (HSC).  The data findings show that the stem cell is making very educated decisions.  Previous studies surmised that the developmental paths of daughter cells were randomly specified by the HSC, however the new study shows that the HSC normally responds appropriately to signals in the environment, making the different MPPs in parallel, but at different speeds and in different amounts to meet the body’s needs.

The team used a mouse model to investigate the patterns of gene expression and cell signaling that determine which developmental paths are favoured when relatively rare HSCs spin off daughter cells, leading to the development of all of  red blood cells, white blood cells and platelets needed for blood clotting, hundreds of billions of new cells each day.

The researchers also used mice to explore the responses of HSCs during transplantation. HCSs are the only cells known to be able to engraft in bone marrow and to regenerate the entire blood system. The team explain that among all blood cells, only HSCs are immortal. Each one can self-renew, spinning off new HSCs with each successive cycle of cell division. Alternatively, HSCs can instead divide into progenitor cells that cannot self-renew or engraft in bone, but which can give rise to generations of ever-more-specialized cells.

The current study also found that MPP2 cells favour production of platelets and red blood cells, while MPP3 cells favour production of inflammatory cells. MPP4 cells are the main producers of lymphocytes that fight specific disease pathogens, but the study team showed that MPP4 cells can easily be re-educated to make many inflammatory cells when regenerative needs are high, as they are following transplantation. They found that during transplantation regenerating HSCs limit their own self-renewal, and instead go to work overproducing MPP2 and MPP3 cells that quickly produce needed red blood cells, platelets and inflammatory cells. Only later does MPP4 production return to normal, enabling the immune system to replenish lymphocytes.

The team surmise that in humans it’s clear that imbalances often arise during aging, with production of disease-fighting immune cells lagging far behind youthful levels.  They go on to add that in the future it will be compelling to test whether the developmental pathways leading to cell specialization can be manipulated to favour production of specific lineage-biased MPPs in order to optimize blood recovery following hematopoietic injury, or to rebalance the output of various cell lineages in an aging or deregulated blood system.

Despite great advances in understanding the mechanisms underlying blood production, lineage specification at the level of multipotent progenitors (MPPs) remains poorly understood. Here, we show that MPP2 and MPP3 are distinct myeloid-biased MPP subsets that work together with lymphoid-primed MPP4 cells to control blood production. We find that all MPPs are produced in parallel by hematopoietic stem cells (HSCs), but with different kinetics and at variable levels depending on hematopoietic demands. We also show that the normally rare myeloid-biased MPPs are transiently overproduced by HSCs in regenerating conditions, hence supporting myeloid amplification to rebuild the hematopoietic system. This shift is accompanied by a reduction in self-renewal activity in regenerating HSCs and reprogramming of MPP4 fate toward the myeloid lineage. Our results support a dynamic model of blood development in which HSCs convey lineage specification through independent production of distinct lineage-biased MPP subsets that, in turn, support lineage expansion and differentiation. Functionally Distinct Subsets of Lineage-Biased Multipotent Progenitors Control Blood Production in Normal and Regenerative Conditions. Passegué et al 2015.