Continued Warming of the Environment Speeds Up Self Destructive Course

OCTOBER 16, 2015
SHELLEY HAZEN
Oceanographers are disturbed by a new side effect of climate change — the bubbling up of methane plumes from the seafloor to the surface, where the gas can be released into the atmosphere.
The unsettling side effect: these plumes could make climate change even worse. However, that’s a result scientists aren’t quite ready to predict simply because the phenomenon is rather new. And once they grow to understand it, the effect of methane plumes may not be so bad.

Carbon dioxide is often pinpointed as the worst greenhouse gas, but in reality, methane is much worse. Pound for pound, it’s actually 25 times more potent than CO2, the Christian Science Monitor reported.
The plumes may have been released by frozen deposits on the seafloor, and oceanographers from the University of Washington have determined that the deposits are releasing 100,000 metric tons a year. That’s about the same amount chugged into the Gulf of Mexico during the 2010 Deepwater Horizon blowout five years ago, Discovery added. The seafloor — Photo Courtesy albund / Shutterstock
Scientists believe that as the ocean warms, the water is thawing deposits beneath the seafloor that have been frozen for thousands of years. The frozen, stable form of the gas is called methane hydrate, and it’s essentially decomposing.
“What we’re seeing is possible confirmation of what we predicted from the water temperatures: (Frozen deposits) appear to be decomposing and releasing a lot of gas,” said lead study author H. Paul Johnson.
In other words, as the university’s Hannah Hickey noted, climate change is turning “dormant solid to a powerful greenhouse gas.”
When these stable deposits break down, they release gas, United Press International reported. These gas bubbles then rise through the depths of the ocean; some of them are reaching the surface.

About 168 methane plumes have been seen off the coast of Washington and Oregon in recent years. Scientists have gathered data on them using sonar from fishing boats and scientific expeditions.
An increasing number of methane plumes were seen a third of a mile below the ocean surface in an area called the transition zone, a spot where warming water may encourage the frozen methane to become a gas. More of the plumes were found on the sea floor.

But few of the methane plumes actually make it to the surface.
As they make their way up from the seafloor, microbes specifically designed to eat methane consume the gas. But this also creates pockets of deep sea water that are low in oxygen and very acidic. These pockets can be pushed upward and suffocate marine life. This water can also make its way to the coasts and into waterways. 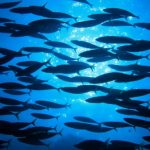 Photo Courtesy aquapix / Shutterstock
Another problem: this methane actually acts as a glue, holding seafloor sediments together. When it’s released in the form of plumes, that glue is simply gone.
More plumes could create dead zones in the water, and this in turn could allow more decomposed gas to make it to the surface. And from there, it can enter the atmosphere.

So far, the research can’t really guarantee much as far as its ultimate effect on climate change. This study also doesn’t actually confirm for certain that these bubbles are coming from those millennia-old frozen deposits.
“We see an unusually high number of bubble plumes at the depth where methane hydrate would decompose if seawater has warmed,” said Professor Johnson. “So it is not likely to be just emitted from the sediments; this appears to be coming from the decomposition of methane that has been frozen for thousands of years.”

One thing is clear: Changes in the environment, caused by global warming, are already having a negative effect on local biology and fisheries, and whatever is going on with the plumes, their presence isn’t helping matters.

Hospital medical errors now the third leading cause of death in the U.S. →
← Monsanto Reaping What They Have Sewn