Monsanto Reaping What They Have Sewn

Monsanto Slashes Jobs as Confidence in Future of Company is Shaken 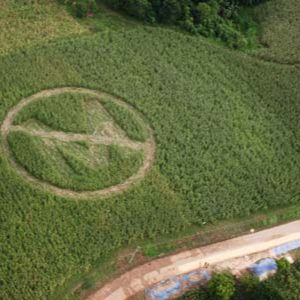 In this handout photo released by Greenpeace shows an aerial view of a crop circle made by local farmers and Greenpeace volunteers in Isabela province, 300 km northeast of Manila, on Saturday Sept. 30, 2006. The crop circle, with a slash over the letter ‘M’ symbolizes farmer rejection of alleged genetically modified Bt corn crops from Monsanto corporation. (AP Photo/Greenpeace,Melvyn Calderon,HO)Monsanto, the world’s largest producer of genetically-modified (GM) crops and their associated pesticides, including the probable carcinogen Roundup, has announced that it will shed 2600 jobs worldwide in an attempt to save the collapsing company.

In a full portfolio report on Wednesday Monsanto released figures that shook its share price, leading to a 4% fall in morning trading.

Monsanto stated; “…plans also include an expected separation of approximately 2,600 employees over the next 18-24 months. The company is developing further plans to reduce its operating spending by an additional $100 million, which would bring the total annual expected savings to potentially $400 million.”
Monsanto said its loss widened to $1.06 a share for the fourth
quarter ended on August 31 from a loss of 31 cents a year earlier.
Sales of corn seeds and traits, Monsanto’s key products, fell to $598 million from $630 million. And sales at the company’s agricultural productivity unit, which includes Roundup herbicide, dropped to $1.1 billion from $1.25 billion in the quarter.
Shares of Monsanto were down 4 percent at $84.00. The stock had fallen roughly 30 percent from a high set last February, and its growth strategy has under intense investor scrutiny after its attempted takeover of Swiss rival Syngenta AG failed.
Test Yourself and Your Family for Glyphosate
Monsanto has also been struggling for investor confidence following the announcement in March that the World Health Organisation’s cancer agency had declared the world’s most widely used weedkiller – glyphosate – a “probable human carcinogen”.
Glyphosate is the base of Monsanto’s whole business model;
a) the glyphosate-based herbicide ‘Roundup’ is Monsanto’s leading product.
b) Roundup is the herbicide that the majority of Monsanto’s GM crops are designed to be grown with.