Vaccines and Pharmaceuticals for Pets Causing More Harm Than Good 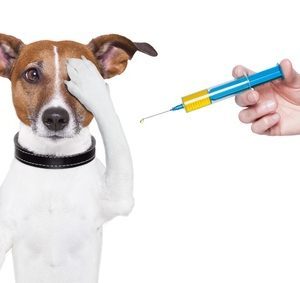 As I was walking our small dog around the apartment complex grounds where we live, I noticed a neighbor who had two small dogs now walking only one. I asked about the missing dog, my personal favorite of the two, and she told me she “had to put her down”.

I asked why, and she explained that she “had come home one day and found her paralyzed”. The vet claimed she must have climbed on something, fell, and injured her spine. I didn’t see her dachshund as much of a climber, and the dog wasn’t old, so I asked, “had she been vaccinated recently”?

Her dachshund had been vaccinated a very few days before its paralysis with the canine influenza vaccine and Bordetella (kennel cough) vaccines. She claimed she had to in order to be able to board the unfortunate dachshund whenever she traveled to visit her daughters in Colorado. Vaccinations are being required for pets, more-so for dogs than cats, more now than ever.

Even though some say one vaccination should last your pet a lifetime, boosters and annual or semi-annual vaccinations are imposed by vets, pet boarders and kennels, and animal shelters. From my own simple observations growing up in the 1950s, and other pet owners over the years since, pets have been getting sicker now more than before.

Autoimmune diseases, allergies, and weakened immune systems from vaccinations maybe? Dr. Will Falconer, DVM, who went holistic using homeopathy for animals, thinks so. He says, “The immune system shouldn’t be attacking itself or overreacting to normal things. Immune systems are put into a state of confusion by vaccines whose sole purpose is to hype that very system.”

As in Humans, So In Humans’ Pets

It appears vaccination increases among dogs and cats has resulted in a corresponding decline in their health similar to the way the CDC’s outrageous vaccination schedule’s assault on babies has seen a corresponding increase of poor health among humans, including paralysis, as in Guillain-Barre’ Syndrome or GBS.

I briefly explained that to the bereaved dachshund owner as a warning for the future of her surviving dog, not to make her feel worse. Also I think it’s sort of my duty to debunk all these medical stories used to cover vaccine dangers and adverse events. If you Google Guillain-Barre’ Syndrome or GBS you’ll find this explanation:

Guillain-Barré syndrome occurs when the immune system attacks the peripheral nervous system, leading to weakness or tingling in the legs. Symptoms sometimes affect the arms and upper body. Severe cases of Guillain-Barré can lead to paralysis and are life-threatening.

Guillain-Barre syndrome is not hereditary or contagious. What causes GBS is not known ; however, in about half of all cases the onset of the syndrome follows a viral or bacterial infection, such as the following: Campylobacteriosis (usually from eating undercooked poultry) Flu (influenza), common cold. [my emphasis added] (Source)

Most cases of GBS occur after vaccinations, especially with influenza, swine flu, and oral polio vaccines (OPVs) than the “official” explanation. So you see, it’s covered. Vaccines are not even mentioned as a potential source. Move on folks. Nothing to see here.

Of course, as in humans, other pharmaceuticals and fake foods contribute their fair share of declining health as well. Dr. Falconer also recommends avoiding vaccinations and heart-worm pills or injections as well as many other standard vet pharmaceuticals. My wife and I have done that with all our pets over the years.

Dr. Will Falconer considers a good diet, (we feed our small dog raw grass fed meats) and homeopathy for animals as the best ways to ensure your pets have healthy happy lives. Find more from him here.

If your pet dog or cat or any other animal in your charge comes down with a serious or life threatening ailment, many pet owners have had great successes with cannabis oils and tinctures. There are several anecdotal testimonies offered here.

Not a pretty picture – Crop Seed Control: Bayer and Monsanto: A Marriage Made in Hell →
← Sleep Apnea and the AHI: Oxygenation, Heart and Respiratory Problems