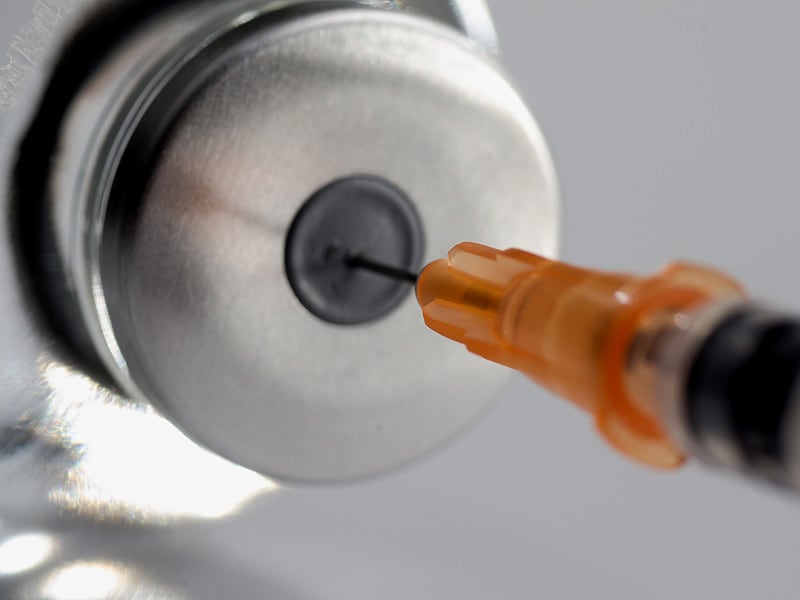 Pediatrician Robert “Dr Bob” Sears, MD, an advocate of unorthodox childhood vaccination schedules who’s called an antivaxxer by some, has been accused by the Medical Board of California of gross negligence.

The board charged Dr Sears on September 2 with improperly exempting a 2-year-old boy from future childhood vaccinations and failing to order neurological testing for him after his father allegedly hit him on the head with a hammer.

If the charges are upheld, Dr Sears’ license could be suspended or revoked, or the medical board could put him on probation.

Dr Sears is best known as the author of The Vaccine Book: Making the Right Decision for Your Child. It lays out alternatives to the vaccination schedule issued annually by the Advisory Committee on Immunization Practices (ACIP) of the Centers for Disease Control and Prevention (CDC) in collaboration with the American Academy of Pediatrics (AAP) and other medical societies.

One schedule of Dr Sears stretches out vaccine administration over a longer time span, which he and his followers consider safer. For example, the alternative schedule published in the 2011 edition of his book puts off the first dose of the polio vaccine until 9 months, while the ACIP then, as it does now, recommends it for the second month. For parents who might otherwise decline any kind of vaccination, Dr Sears suggests a “selective” schedule that omits the polio vaccine (except for children traveling to Asia or Africa) as well as vaccines for measles, mumps, and rubella (MMR), and certain other diseases, unless children test negative for immunity at 10 years of age.

Supporters of Dr Sears say that the medical board is making an example of him because he campaigned against a 2015 law in California that eliminates religious or personal exemptions from childhood vaccinations needed to attend school but preserves medical exemptions. California lawmakers passed the measure, which took effect this year, in response to recent outbreaks of measles and pertussisattributed in part to parents choosing not to vaccinate their children for fear of harming them. One measles outbreak in late 2014 and early 2015 occurred in Orange County, where Dr Sears practices with other family members.

Cassandra Hockenson, a spokesperson for the California medical board, responded to the allegation that Dr Sears is being singled out for his opposition to the new law by saying that the board takes disciplinary action against a physician only when it receives a complaint. “We don’t make them up,” Hockenson told Medscape Medical News.

The California medical board issues a formal accusation against a physician if an investigation finds evidence that he or she may have violated state law governing the medical profession. The physician has the opportunity to settle the case with the board in what resembles a plea bargain. If negotiations fail, the case goes to a hearing before a state administrative judge, who will recommend an action, if any, for the medical board to take. It may be as light as a public reprimand or as heavy as license revocation.

No Detailed Patient History, the Board Alleges

The accusation by the California medical board describes six office visits in 2014 and 2015 in which Dr Sears saw a boy identified by the initials JG. All the visits occurred before California’s new vaccination law was in force.

JG was 2 years old when he visited Dr Sears for the first time on April 3, 2014. According to the medical record, the boy’s mother said that he had reacted to his 2-month vaccines with “shut down stools and urine” for 24 hours. After receiving his 3-month vaccines, JG was limp “like a ragdoll” for 24 hours and not himself for up to a week.

Dr Sears wrote a letter that excused JG from all future childhood vaccinations, the board accusation stated. The pediatrician said the boy’s kidneys and intestines had shut down after the 2-month vaccines and that after the 3-month vaccines he experienced what appeared to be severe encephalitis.

“Due to the severity of this second reaction, I recommend no more routine childhood vaccines for the duration of his childhood,” the medical board quoted Dr Sears as writing.

The board said that a physician following the standard of care would have obtained a detailed history of the vaccines the patient received as well as the subsequent reactions. That information would form the basis of an evidence-based recommendation for future immunizations.

By not obtaining the basic information needed for decision-making, Dr Sears departed from the standard of care, “leaving both patient J.G., the patient’s mother, and his future contacts at risk for preventable and communicable diseases.” The board also faulted Dr Sears for not keeping a copy of the letter excusing JG from future vaccinations in the medical record.

The reference to “3-month vaccines” in the mother’s account raises questions because the ACIP does not schedule any vaccinations at the 3-month mark in its current recommendations. That was also true in 2011 or 2012, when JG possibly might have been vaccinated at the 3-month mark. Both the alternative and selective vaccine schedules in Dr Sears’ book recommend the first doses of two vaccines — one for pneumococcal disease and the other for Haemophilus influenzae type b (Hib) — at 3 months, suggesting that the mother may have been following one of those schedules. The ACIP recommends giving the first doses of those two particular vaccines at 2 months.

The California medical board said that Dr Sears also was grossly negligent in how he handled a visit with JG on June 23, 2014. JG’s chief complaint was a headache. Dr Sears recorded in the patient history that the boy’s father had hit him on the head with a hammer 2 weeks earlier. The history also referred to a split lip prior to the “hammer incident.” The physical examination section of the record noted “no residual remarks now.” With those few words, the board said, Dr Sears had failed to document an adequate physical exam.

The board also faulted Dr Sears for not conducting neurological testing — not mentioned in the medical record — when JG had complained of headache following head trauma.

Dr Sears’ office apparently reported the “hammer incident” to the California Department of Social Services. The boy’s medical record contains a one-page form dated June 25, 2014, from that department documenting the outcome of a referral. The result checked off on the form reads “Allegations cannot be substantiated — case closed.”

A request for an interview with Dr Sears was referred to his attorney, Rick Jaffe, who said his client is not speaking to the news media about the board charges at this time.

In a press release, Jaffe said that the patient JG “had two unusual and severe vaccine reactions and his situation warranted a medical exemption. To continue vaccination could have put the child at risk of further harm.”

“All physicians have an ethical duty to do no harm to a patient,” said Jaffe. “This is no less true when a child suffers serious side effects from any medical intervention. We anticipate this case will do much to further public education on the importance of recognizing severe vaccine reactions and providing informed consent for medical care.”

In a September 13 post on his Facebook page, Dr Sears thanked his supporters for creating the website www.standwithsears.org. The website, which solicits money for his legal defense, states that “patient-doctor relationships, health freedom and informed consent” are at stake in the medical board controversy.

“Dr Bob is clearly an easy target as he is the most visibly outspoken proponent for health freedom in California,” the website states. “If the medical board is successful in their attempt to revoke his medical license, the loss won’t just be Dr. Bob’s livelihood. Fewer doctors will be courageous enough to speak out for fear of similar corrective action from the medical board. Bureaucrats and businessmen have no place in making medical decisions for the people of California. That should be left to doctors and their patients.”

Dr Sears makes a case for “health freedom” in his book on vaccination. He calls vaccines “very important” and acknowledges that “the more kids who are vaccinated, the better our country is protected and the less likely it is that any child will die from a disease.”

“But from a freedom-of-choice point of view, we really can’t fault parents who think that vaccines are too risky and put their own kids first,” he writes. “Parents do, and should, have the right to decline vaccination.”

Such views, and his promotion of alternative vaccination schedules, get him tagged as an antivaxxer. There is also his apparent sympathy for, if not support of, discredited British researcher Andrew Wakefield. A 1998 article coauthored by Wakefield in The Lancet triggered fears about childhood vaccines — and a movement — by suggesting a link between the MMR vaccine and autism. However, The Lancet retracted the article in 2010 after the United Kingdom General Medical Council determined that Wakefield and two other authors had conducted the research dishonestly and irresponsibly. A series of articles and editorials in BMJ described the study as “an elaborate fraud.” Wakefield was banned from practicing medicine in the UK.

Wakefield has not remained silent in proclaiming his innocence or his message. He is the director of a 2016 documentary titled Vaxxed, which claims that the CDC covered up evidence for a causal relationship between the MMR vaccine and autism. The website for the movie identifies one of the cast members as James “Dr Jim” Sears, MD, the brother of Robert Sears, MD. Both brothers practice with their father William “Dr Bill” Sears, MD.

The AAP has condemned Vaxxed as dishonest and dangerous. Robert Sears, MD, has promoted the documentary several times on his Facebook page. “Seen it yet?” he asked in an August 10 post. “If not, here it is…and since Congress is obviously not going to do anything about it, looks like it’s up to the people.”

In a 2009 article in the journal Pediatrics on Dr Sears’ alternative vaccine schedules, infectious disease expert Paul Offit, MD, said that Dr Sears “sounds many anti-vaccine messages” and ignores the expert groups that have vouched for the safety of vaccines. Chief of the division of infectious diseases at Children’s Hospital of Philadelphia, Pennsylvania, Dr Offit stated that if more parents adopt Dr Sears’ schedules, fewer children will be protected, and vaccine-preventable diseases will take their toll.

Dr Offit is the author of the book Deadly Choices: How the Anti-Vaccine Movement Threatens Us All, thecoinventor of the rotavirus vaccine, and a frequent contributor to Medscape.

His 2009 article on Dr Sears’ vaccination schedules is part of an AAP media kit on immunization available on the society’s website.

Zika Virus Painted as A Threat to Mankind: What are the facts and what is the truth? →
← 3 Deaths from Codeine Prompt Reaction From Pediatricians as Vaccine Adverse Effects are Ignored