The War Over Raw Milk Heats Up 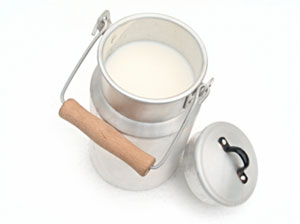 The FDA has long banned interstate sales of raw milk. Many states restrict or prohibit the sale of raw milk entirely.

Raw milk drinkers and sellers began fighting back in early 2010, filing suit against the FDA and claiming that banning interstate sales is unconstitutional. The case is now pending while the crackdowns continue.

Raw (unpasteurized) milk contains enzymes and bacteria have been shown to strengthen your immune system, develop healthy bacteria in your intestines and reduce the risks of everything from respiratory disease to obesity. Pasteurization destroys both good and bad bacteria.

The FDA officially banned interstate sales of raw milk in 1987, but it wasn’t until 2006 that a crackdown began. Agricultural departments in several states, with the help of the FDA, started to stage raids of small dairies and buying clubs.

“On occasion, people do get sick from drinking raw milk. But the number of people sickened by raw milk compared to other foods does not seem to warrant the FDA’s focused, expensive campaign …

No government regulations of interstate commerce in peanuts, kale, or cantaloupes have been suggested, despite the much greater number of people sickened by consuming these foods. Sushi, a raw food that provides a greater opportunity for illness than raw milk, is legal in all 50 states, too.”

Millions of Americans get sick every year from eating contaminated foods. Among them, at least 325,000 will be hospitalized and 5,000 will die, according to FDA statistics.

Many foods are responsible for these illnesses. Most recently, romaine lettuce sold to wholesalers was recalled in multiple states after concerns of E. coli contamination, and a few weeks later romaine lettuce-based, ready-to-eat salads were recalled due to possible Salmonella bacteria.

Americans are no strangers to such recalls.

One of the most memorable occurred in 2006, when all spinach was pulled from store shelves. Alfalfa sprouts, tomatoes, beef and jalapeno peppers have also been recalled in recent years after serious illnesses have been reported.

Yet, only one food — raw milk — has been unfairly singled out and targeted by the FDA, the USDA and even the FBI as a “health risk” worthy of armed raids and crackdowns — a food that also happens to be so low on the food-borne illness risk scale it’s hardly measurable.

Why is Raw Milk Being Targeted?

According to CDC data, from 1993 to 2006 there were only about 116 illnesses a year linked to raw milk — that amounts to less than .000002 percent of the 76 million people who contract a food-borne illness in the United States each year!

This is the reality of the “dangerous” food the FDA has launched an attack against — seizing raw dairy products from private food coops, arresting small raw dairy farmers and threatening distributors with fines and jail time. They’ve also devoted an entire section of their web site to extolling the “dangers of unpasteurized milk.”

Meanwhile, ground beef sold in supermarkets across the United States, with the FDA’s gold seal of approval, commonly contains meat from hundreds of animals, often from different parts of the world.

The animals are not only raised in concentrated feedlots that are breeding grounds for dangerous bacteria and viruses, but they are fed an unnatural diet of grains, which creates a much higher level of acidity in the animal’s stomach, which E. coli bacteria need to survive.

Despite this, there is no federal requirement for meat grinders to test their ingredients for E.coli prior to selling them. And most retailers do not test either. So not only is your meat being raised in ways that are known to encourage disease-causing organisms, but little to no testing is being done to make sure the meat is safe before it reaches your dinner plate — and the FDA is A-OK with this.

It may also surprise you to learn that Chinese-raised fish, which are commonly sold in U.S. supermarkets, are often fed a diet of chicken waste and human waste, while toxic sewage sludge is used to fertilize many U.S. crops — and again this is all within the realm of FDA regulations.

But raw milk — a food that promotes the growth of healthy bacteria in your intestine, which in turn has a significant, beneficial impact on your overall immune function and health — has been literally outlawed in many states.

The dairy cows used to produce most of the pasteurized dairy sold in the United States are raised in similarly deplorable conditions, which is why the milk has to be pasteurized in order to make it safe for human consumption.

But high-quality raw dairy farmers march to an entirely different, and superior, drummer. California, specifically, (where raw milk is legal) has its own special set of standards for raw milk for human consumption, in which farmers must meet or exceed pasteurized milk standards, without pasteurizing.

The conventional dairy industry, realizing that increasing numbers of consumers are recognizing the health benefits of raw milk and going to great lengths to obtain it, has redoubled their efforts to make sure that raw milk sales are not able to grow, and certainly not able to become mainstream, where they could begin to threaten their very own livelihoods.

If raw dairy really caught on, you would think that the dairy industry would simply follow suit and begin producing raw products to meet the demand. But this would be virtually impossible with the way their overcrowded farms are run.

Their business depends on pasteurization, and that is why their powerful lobbyists will stop at nothing to persuade government agencies to keep raw milk bans in full force.

Unfortunately, as is often the case the FDA has jumped on the Big Business bandwagon and is doing everything in their power — even arresting small farmers! — to protect the interests of the Big Dairy industry.

The Raw Milk Revolution is Upon Us …

Right now the “war” between the FDA and consumers looking to secure their right to purchase and drink raw milk is reaching a peak.

Earlier this year, the Farm-to-Consumer Legal Defense Fund (FTCLDF) filed a lawsuit against the FDA over their raw milk ban, claiming it is unconstitutional. The FDA’s rebuttal contained the following extremely concerning and outrageous statements, which make it very clear they believe you have no right to unprocessed food:

If you go by these assertions, it means the FDA has the authority to prohibit any food of their choosing and make it a crime for you to seek it out. If, one day, the FDA deems tomatoes, broccoli or cashews capable of causing you harm (which is just as ludicrous as their assertions that raw milk is harmful), they could therefore enact such a ban and legally enforce it.

Get Informed and Protect Your Food Freedom

By joining the campaign to make access to healthy raw milk a right for all Americans, you are not only standing up for raw milk; you’re taking a stand to protect your freedom of food choice.

For more information, I urge you to listen to my interview with Mark McAfee, the founder of Organic Pastures, one of the largest producers of raw milk in the United States, along with this video with health and business journalist David E. Gumpert.

You can also find lots of valuable information in Gumpert’s book, The Raw Milk Revolution, and on McAfee’s website.

Finally, if you’re interested in purchasing raw milk, RealMilk.com can help you find a high-quality source in your area.