Fixing a World That Fosters Fat

WHY are Americans getting fatter and fatter? The simple explanation is that we eat too much junk food and spend too much time in front of screens — be they television, phone or computer — to burn off all those empty calories. 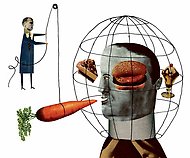 Unfortunately, behavior changes won’t work on their own without seismic societal shifts, health experts say, because eating too much and exercising too little are merely symptoms of a much larger malady. The real problem is a landscape littered with inexpensive fast-food meals; saturation advertising for fatty, sugary products; inner cities that lack supermarkets; and unhealthy, high-stress workplaces.

In other words: it’s the environment, stupid.

“Everyone knows that you shouldn’t eat junk food and you should exercise,” says Kelly D. Brownell, the director of the Rudd Center for Food Policy and Obesity at Yale. “But the environment makes it so difficult that fewer people can do these things, and then you have a public health catastrophe.”

Dr. Brownell, who has a doctorate in psychology, is among a number of leading researchers who are proposing large-scale changes to food pricing, advertising and availability, all in the hope of creating an environment conducive to healthier diet and exercise choices.

To that end, health researchers are grappling with how to fix systems that are the root causes of obesity, says Dee W. Edington, the director of the Health Management Research Center at the University of Michigan.

“If you take a changed person and put them in the same environment, they are going to go back to the old behaviors,” says Dr. Edington, who has a doctorate in physical education. “If you change the culture and the environment first, then you can go back into a healthy environment and, when you get change, it sticks.”

Indeed, despite individual efforts by some states to tax soda pop, promote farm stands, require healthier school lunches or mandate calorie information in chain restaurants, obesity rates in the United States are growing. An estimated 72.5 million adults in the United States are obese, according to the Centers for Disease Control and Prevention. Last year, about 27 percent of adults said they were obese, compared with about 20 percent in 2000, as reported in a C.D.C. study published this month. And, the report said, obesity may cost the medical system as much as $147 billion annually.

So what kind of disruptive changes might help nudge Americans into healthier routines? Equalizing food pricing, for one.

Fast-food restaurants can charge lower prices for value meals of hamburgers and French fries than for salad because the government subsidizes the corn and soybeans used for animal feed and vegetable oil, says Barry Popkin, a professor of nutrition at the Gillings School of Public Health at the University of North Carolina at Chapel Hill.

“We have made it more expensive to eat healthy in a very big way,” says Dr. Popkin, who has a doctorate in agricultural economics and is the author of a book called “The World Is Fat: The Fads, Trends, Policies and Products That Are Fattening the Human Race.”

The inflation-adjusted price of a McDonald’s quarter-pounder with cheese, for example, fell 5.44 percent from 1990 to 2007, according to an article on the economics of child obesity published in the journal Health Affairs. But the inflation-adjusted price of fruit and vegetables, which are not subject to federal largess, rose 17 percent just from 1997 to 2003, the study said. Cutting agricultural subsidies would have a big impact on people’s eating habits, says Dr. Popkin.

“If we cut the subsidy on whole milk and made it cheaper only to drink low-fat milk,” he says, “people would switch to it and it would save a lot of calories.”

Health experts are also looking to the private sector. On-site fitness centers and vending machines that sell good-for-you snacks are practical workplace innovations that many companies have instituted.

On a more philosophical level, innovative companies are training managers not to burn out employees by overworking them, says Dr. Edington of the University of Michigan.

“Stress comes up. It can lead to overeating and obesity,” Dr. Edington says. At companies that see employee health as a renewable resource, he adds, managers encourage employees to go home on time so they can spend more time with their families, communities or favorite activities. “Instead of going home with an empty tank, you can go home with the energy that we gave you by the way we run our business,” he says.

CORPORATE-SECTOR efforts aren’t entirely altruistic. It’s less expensive for businesses to keep healthy workers healthy than to cover the medical costs of obesity and related problems like diabetes. For employees at I.B.M. and their families, for example, the annual medical claim for an obese adult or child costs about double that of a non-obese adult or child, says Martin J. Sepulveda, I.B.M.’s vice president for integrated health services.

I.B.M. has been promoting wellness for employees since the 1980s. But in 2008, it began offering a new program, the Children’s Health Rebate, to encourage employees to increase their at-home family dinners, their servings of fruits and vegetables, and their physical activities, as well as to reduce their children’s television and computer time.

In addition to helping prevent obesity in children, Mr. Sepulveda says, the program is aimed at employees who might neglect to exercise on their own but would willingly participate as part of a family project. Each family that completes the program receives $150.

All of these ideas sound promising. But the architecture of obesity is so entrenched that policy makers, companies, communities, families and individuals will need to undertake a variety of efforts to displace and replace it, says Alan Lyles, a professor at the School of Health and Human Services at the University of Baltimore.

And American efforts can seem piecemeal compared with those in Britain, where the government has undertaken a multipronged national attack, requiring changes in schools, health services and the food industry.

Britain now places restrictions on advertising fatty, sugary and salty foods during children’s shows, for example. And by 2011, cooking classes will be mandatory for all 11- to 14-year-old students in the nation. The hope is to teach a generation of children who grew up on prepared foods how to cook healthy meals, and perhaps to make eating at home — instead of at the local fried fish-and-chips shop — the default option.

The War Over Raw Milk Heats Up →
← Lies, Damned Lies, and Medical Science – Magazine – The Atlantic